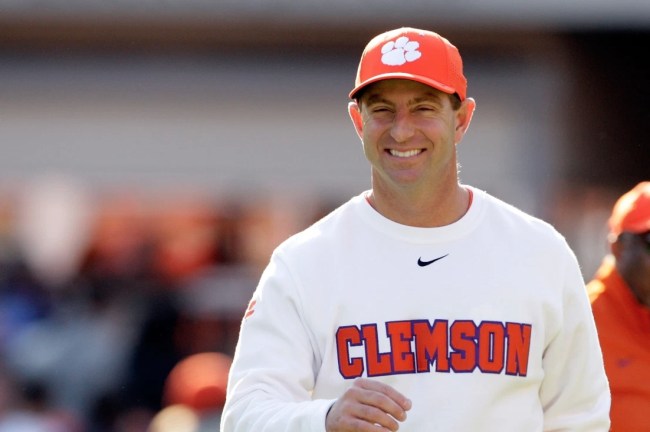 It’s been three days since the Florida State – Clemson game was called off after the Seminoles elected to pull out of the game just a few hours before kickoff and Tigers head coach Dabo Swinney simply will not, can not, get over it.

Florida State elected to cancel the game after a Clemson player reportedly tested positive for COVID-19 while making the trip down to Tallahassee. The day after the game was canceled, Swinney spoke to the media about the situation claiming that FSU canceled the game to avoid playing the Tigers. “This game was not canceled because of COVID, COVID was just an excuse to cancel the game,” Swinney said.

FSU head coach Mike Norvell responded to Swinney’s comments the following day denying Swinney’s insinuation that his team ducked the Tigers while also stating that the decision to cancel the game was made entirely by the team’s medical personnel. Norvell took a jab at Swinney saying “football coaches are not doctors.”

The back and forth between the two head coaches has been entertaining and just when you think the flames have burnt out on the feud, Swinney keeps throwing gasoline on it.

Since he has already taken a shot at Norvell and called out the program for allegedly ducking the game, now the Clemson head coach is going after Tallahassee and the football program’s recent struggles.

Swinney has never been one to lay low, he’s one of the more vocal coaches in all of college football, but it is a bit surprising that he hasn’t let this go yet. Nobody in Tallahassee has offered up any ‘advice’ as he pointed out in his shot at the Noles, but you can’t blame him when he simply uses facts as part of his trash talk.

Clemson has reached the top of the college football world, a spot FSU used to occupy. Swinney is just reminding the Noles of their little brother status, which there’s nothing with that, but with Swinney continuing to take shots this whole situation is flirting with being overplayed.