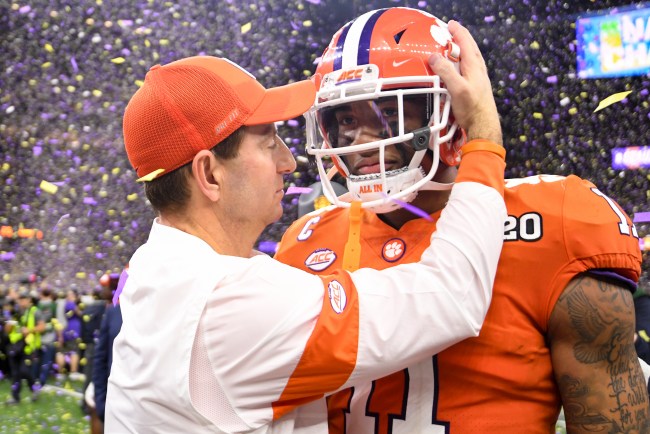 Clemson head football coach Dabo Swinney is, arguably, the greatest coach in the college game right now. There may be millions of Alabama fans arguing that statement, but, based off of the past five years, Dabo has flexed some serious muscle to at least make a legit case. Hell, it’s why the dude gets paid $9.3 million per year to run one of the top-notch programs.

I mention all that as a preface for what I’m about to say: The fact that Dabo Swinney doesn’t believe that the value of a college football national title is diminished this season is absolutely moronic. I’ve got a ton of respect for the guy, but, sheesh, when you eliminate every single team from the Big 10 and Pac-12 because of those schools’ worries over COVID-19 — removing national title contenders like Ohio State and Oregon, among others — it seems like a bold statement by the Clemson head coach to believe that nothing changes.

For reference, while talking on a virtual press conference recently, here’s what Swinney had to say when asked if he believes the importance of the national championship will be damaged without two of the Power 5 conferences not playing in the college football season.

“Pick the four best teams can go play. And we’ve been one of those four for five years in a row. So, in my opinion, it doesn’t change anything for us. We’re just trying to be the best Clemson we can be. And whoever you play every week, you try to win that game, and you try to keep moving forward.

“We don’t have any control over that stuff. And I certainly don’t judge them in any way. Everybody’s gotta make decisions that they feel’s best. If they feel like that’s what best for them, then so be it.”

“So maybe it’s a shortened season, maybe it’s not as many teams or whatever. But you best believe whoever wins it is gonna have to earn it. Ain’t nobody gonna give nothing to nobody. So you can only control what you control, and we just hope we can have the opportunity to play.”

Now, here’s the one part that I immediately recognized from Dabo’s comments: “it doesn’t change anything for us.” As a team that’s reached four of the past five National Championship Games, Swinney’s right that his team isn’t impacted much; because Clemson has proven during that run that they can compete (and beat) nearly anyone it plays. But that doesn’t mean this year’s college football national champion shouldn’t have an asterisk beside it.

We talked about this in our Slack channel a little bit, which had some pretty good debate. My argument was, if I’m in a 10-car race that’s supposed to be all Porsches, but nine other Porsches bail and are replaced by Corvettes, I’m not so sure winning feels great. This isn’t to say every single team from the Big 10 or Pac-12 was a national title contender, but you get the point.

On the flip side, Cass Anderson and Mark Harris argued that they agree with Dabo Swinney, and that the only real title contender not playing this college football season is Ohio State, with Mark even adding that “if an SEC, ACC or Big 12 team runs the table, that’s legit.” Fair, but, again, not every single team in that conference is a title contender. Sure, they’ve traditionally been better than teams in the Pac-12 and Big 10, but that’s all assumption.

Bottom line is this: Every single champion in every single sport this year should come with a caveat. NBA teams aren’t at full strength because of some players opting out. NFL teams are seeing guys stay home. And college football has entire conferences taking the year off to help protect players and coaches. So Dabo Swinney’s belief that a college football national title in 2020 isn’t diminished a little bit might be the most moronic thing I’ve heard in a long time — and that’s saying something, because I had my little sister stay with me all week.

As a team, you can only play the teams on your schedule; and Clemson has done that to near perfection over the past few years. But the four best teams may not be in this year’s College Football Playoffs, meaning the competition is potentially diluted without the unknown of what could have been had Big 10 and Pac-12 teams competed this upcoming season. And that’s why Swinney’s comments are so off-base.