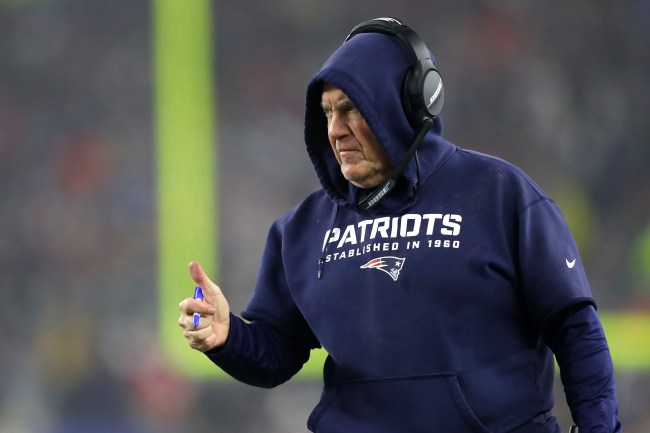 There’s no denying Bill Belichick’s a football genius, with the New England Patriots head coach showing unique ways in which he can beat opponents by taking advantage of weird strategies and loopholes in NFL rules. To say that “The Hooded One” does things his own way would be an understatement, which is part of the reason why he’s had a culture that has produced A+ results for the past two decades in Forxborough, otherwise known as the “Patriot Way.”

While Belichick might be one helluva football mind, the six-time Super Bowl winning head coach is also pretty fucking good at scheming up ways to find an advantage over opponents. Whether it’s secretively having Pats’ staffers film opponents (SpyGate) or deflate footballs (DeflateGate), Bill Belichick will push the boundaries until somebody catches him. It’s pretty hilarious that the greatest football coach of all-time is like a kid sticking his hand in a cookie jar; just waiting for somebody to yell at him to stop.

As Belichick and his Pats prepare for life without Tom Brady under center, everyone seems to think their championship window is all but shut. Even after the team signed former MVP Cam Newton to replace TB12, the general consensus is that New England won’t be nearly as dominant as they’ve been since winning their first Super Bowl during the 2001 season. And, because Belichick always seems to have something up his cut-off sleeves, football fans think he’s plotting for one huge tank job this NFL season.

With more than a few prominent Patriots players opting-out of this year’s NFL season because of the ongoing pandemic — including Pro Bowl linebacker Dont’a Hightower — is Bill Belichick really that conniving, that arrogant and (maybe just) that wicked smaht to pile up a bunch of losses during a dysfunctional season in order to land a top pick in the 2021 NFL Draft and, possibly, select Trevor Lawrence from Clemson? If you ask fans on Twitter, they sure as hell think so.

Bill belichick trying to convince patriots players to stay and not opt out knowing he can have Trevor Lawrence pic.twitter.com/Goz3ckQhJR

Bill Belichick walking to the podium to draft Trevor Lawrence next year after his entire team opts out of the season. Just brilliant pic.twitter.com/oDDZETjv4q

Save this tweet. Patriots tanking to get Lawrence has a 80% chance of happening.

Lol I thought I was the only one thinking this

Bill Belichick watching all of his players opt out so he can tank and get Trevor Lawrence in the draft. pic.twitter.com/liuYBLY61W

Bill Belichick like “ Sign Cam Newton but still have half of the roster opt out of the season to Tank for Trevor Lawrence”
😆 😆 pic.twitter.com/wgq8t7RASq

Bill Belichick telling his entire team to opt out so he can tank without looking like tanking and draft Trevor Lawrence. pic.twitter.com/WUClQQcKY6

If you’re a Pats fan, this idea alone has to bring a big ol’ smile to your face. The fact that NFL fans seriously think Bill Belichick is this cocky and this strategic proves why his Patriots are always competing for titles — because he gets into everyone’s minds.

Don’t think for one second that Belichick isn’t looking at his team’s roster dwindling as more players announce their concerns over the coronavirus and not think to himself, “Hmm, maybe I tank this season, blame the pandemic and the adjustment to a new quarterback after Brady, draft Trevor Lawrence, and restore the franchise back to contenders in 2021.” There’s no way in hell the guy’s legacy would be tarnished with one losing season, so this has to be a serious possibility — even if it’s being commented on in jest by fans on Twitter.

Thing is, if this is something that Bill Belichick is really thinking about — and he’s that fucked in the head to probably be considering this — it’d only add to his legacy if it all came to fruition in the end. The guy’s an absolute genius, and he’s playing chess with the entire league as the other 31 NFL teams are still just trying to learn how to play checkers.