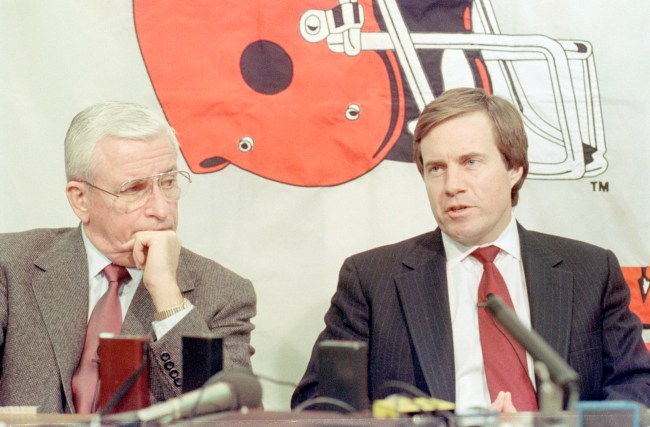 Warning: Those experiencing severe sports withdrawals should consult your beer fridge before reading. Soberness mixed with sports-induced sadness is a disease for which there is no cure.

Daniel Jeremiah, a former NFL scout who now works as an analyst for the NFL Network, gifted Twitter with a near-30-year-old glimpse into the mind of an eventual legend.

The below document details the Belichick’s offensive wishlist after he was named head coach of the Cleveland Browns in 1991. After four seasons of helming a cursed franchise, Belichick was unceremoniously fired.

I think you’ll enjoy this… We were given this handout during a scout school from my time with the Ravens. Coach Belichick has held true to almost all of this over the years. pic.twitter.com/pWB3oqo5JU

Offensive lineman: “Can use a slightly dumber guy who is a good athlete.”

Dan Connolly set the record for the longest kickoff return by an offensive lineman in NFL history 8 years ago today, returning a squib kick 71 yards to set up a Patriots touchdown. pic.twitter.com/TVuTMZZW5Y

“Guys who get penalized a lot are not what we want.”

Bill Belichick was mad after that penalty on 4th down.pic.twitter.com/2S0MCXiuA6

If my girlfriend says these words to me in our wedding vows, I swear I’ll stop drinking on weekdays.

“Bend in his legs. Not erect or stiff.”

If my girlfriend stops saying these words to me, that means I’ve stopped drinking on weekdays.

“Good measure of a TE is also what he does with the ball after the catch.”

“QB: #1 is to make good decisions — then arm, size, physically tough, leadership, guys look up to and have confidence in, a real competitor. Accurate rather than guy with a cannon. Emphasis on our game will be on decision, timing, accuracy — guy needs to be confident, intelligence is importance but not so much so as field awareness and judgement. Can’t be sloppy fundamentally, unsound guy w/ ball handling, tech’s, etc. Footwork, drops, release, etc. — QB has to be able to throw the ball with accuracy.”

If this doesn’t prove Tom Brady is a system QB, I don’t know what does.

(I can say that because he just left my team after 20 years of unprecedented dominance for the Tampa Bay Fucking Buccaneers and I’m still mourning.)

He had this whole thing figured out 30 years ago. Pretty nuts.