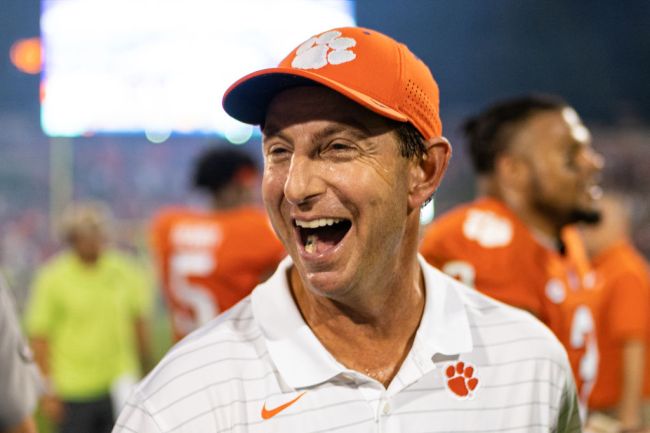 Dabo Swinney is holier-than-thou. His comments about his team on Monday night placed the blame on this players for poor results in 2021 without so much as acknowledging himself or his staff and it was incomprehensible.

Clemson football lost its third game of the season on Saturday, marking its first three-loss season since 2014 and only its second since 2011. And there are still five games left to play.

In response to the Tigers’ on-field play, Swinney had a blunt message for his team moving forward.

Dabo on his radio show tonight: "This team has to re-learn how to win. You're not entitled to win just because you come to Clemson."

Swinney’s comments raises one big question— Is it not his responsibility to teach his players how to win?

He could have said: “I need to re-teach this team how to win. We are not entitled to win because we are Clemson”

Do you hear/see the difference?

As the head coach of what is considered powerhouse program in recent years, Swinney has signed a top-10 recruiting class in each of the last three years. His roster is STACKED with four and five-star recruits.

And yet, he is not taking responsibility, but choosing to blame the players and their “entitlement” for Clemson’s woes. He goes so far as to say his team has to re-learn how to win, but doesn’t say that it is his job to teach them how to win.

Classic Dabo. It’s all about him until something goes wrong, and then it’s about those around him. Funny how that works.

Clemson has made a New Year’s Six bowl in nine of the last 10 years and nine of the 12 years that Swinney has been atop the program. That will not be the case this year, but that isn’t to say their season is over.

There is a lot of ball left.

With the current records across the ACC, the Tigers could very easily make a bowl game or even win out and finish the year with three losses. Again, his team is overloaded with talent.

Sure, sometimes winning can be a curse and success if oftentimes more difficult to sustain than achieve. But to maintain success on a team that is as good as the athletes on Clemson’s sideline, it falls on the head coach.

Blaming the players is the LAST thing that a coach should do. In fact, Bret Bielema was wrongly roasted for making similar comments about his own players just last week.

Bielema ended up explaining the context to his viral quote and Illinois went out and beat a top-10 Penn State program on Saturday.

There is no further context to Swinney’s finger-pointing. He even called his players entitled.

Meanwhile, the 51-year-old is keeping his persona at the forefront. Here is what he said about Clemson’s record on Sunday night:

While that is actually a great mindset, as life will go on, he then turned around on Monday night and threw his players under the bus. Does he not see the contradictory nature of his actions?

Swinney wants the spotlight on him.

And then, when one season in more than a decade starts going south, he is quick to jump ship on his own team and puts the blame on others because he remains “holier than thou.” It’s truly remarkable.