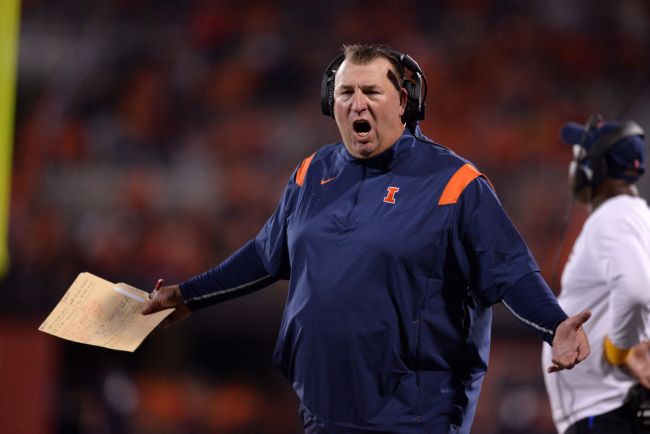 After opening the season with a win over Nebraska, Illinois’ season has not gone as planned. The Fighting Illini have lost five of their last six games with their lone win coming against Charlotte.

Illinois enjoyed a bye week this past week, but head coach Bret Bielema is still very much frustrated with his team. In fact, he’s so fed up with his squad that he took it upon himself to criticize his own players during his press conference on Monday.

“I just know this, as a head coach you’re only as good as your roster,” Bielema said. “I kind of learned that the first time I went to the Kentucky Derby, right? Nobody was betting on the jockeys. Everybody was betting on the horses, so to win the derby you gotta have the right horse, and I think our players are gonna be a reflection of what our program stands for.”

“In particular the offensive line, I don’t believe we have a player in the two-deep  that [the previous coaching staffs] have recruited here over the last three years that is really significantly doing anything for us in the playing department, and that’s a major concern.”

That’s what we like to call throwing players under the bus.

#Illini Bret Bielema not holding back about his roster today, especially OL:

"I don't believe we have a player in the 2-deep that they've recruited here over the last 3 years that is really significantly doing anything for us in the playing department, that's a major concern" pic.twitter.com/CSvWn0MmJD

Maybe Bielema took this approach thinking that it may motivate his players. After all, he’s likely tried pretty much any other tactic to will his team to a win, but nothing has clicked seeing as his team is 2-5 on the season.

It’s a bold strategy, to say the least, and plenty of college football fans roasted Bielema for his comments.

Going to send your son to play for a man like that treated someone else’s kid in the manner he did today? Doesn’t matter if you didn’t recruit them, take on the challenge and coach them up…. SMH

Has this guy ever won anything as a HC? Took a two min video to see exactly why he hasn't

This is the guy who bragged about having the biggest O-line in football, including NFL, when he was at Arkansas, and he couldn’t do shit with them. This is a Bret Bielema problem, not a roster problem.