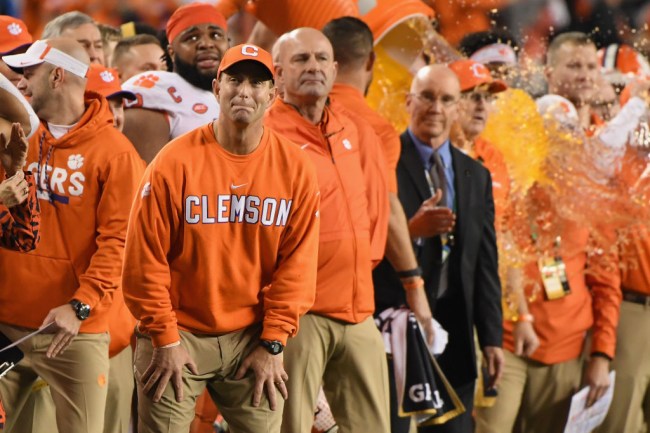 Florida State and Clemson are set to do battle this Saturday and ahead of the Seminoles’ trip to Death Valley Dabo Swinney had some interesting comments.

The ‘Noles enter Saturday’s game at 3-2, but the two-time national champion coach thinks they should be 5-0 telling 247 Sports exactly that claiming “this is the most talented team we’ve played – by far. Should be 5-0.”

I’m sorry, what? This statement just doesn’t make any sense.

The ‘Noles have been bad this year, really bad. In fact, you could argue that they should be 2-3 on the year instead of 3-2. The only argument here is that they’ve led in every game, but that accomplishes nothing come the final whistle. They’ve given away those leads due to poor coaching and execution, you know, two things you need to go unbeaten in your first five games.

Florida State opened the season up by blowing a 31-13 lead at home to Boise State before giving up 23 unanswered en route to a loss. The very next week Louisiana Monroe came to Tallahassee and took them to overtime eventually losing 45-44 and the game should’ve gone to a second overtime but Monroe missed the extra point. They gave up a smooth 419 yards to Monroe that night, too.

The Seminoles then lost on the road to Virginia 34-27 in Week 3 before winning their last two games against an unimpressive Louisville team and finally showed life against North Carolina State with a 31-13 home win.

Florida State ranks 53rd nationally in yards per game and 109th in yards allowed per game. Those two basic stats alone should tell you that this team has no business being 5-0 heading into Saturday even with the weak schedule they’ve played up to this point.

Florida State has been a laughing stock not only this year but since Willie Taggart arrived last season taking the team to a 5-7 record.

Can Taggart enter the transfer portal

So no, I’m sorry to break it to you Dabo, but this team shouldn’t be 5-0. It sounds like some classic coach-speak pointed at his own players to get their minds right ahead of Saturday.

It shouldn’t be overlooked that Swinney also said it’s the most talented team they’ve played, which if I’m a Texas A&M fan I’m pretty mad about that.

The Aggies haven’t been what most people thought they would be this season, but I’d still put them above Florida State talent wise and certainly as a better-coached football team. If you want to look it off of recruiting rankings over the past three years, A&M’s average finish in 247’s rankings has been 11th while FSU’s has been 12th. No big difference there, but it doesn’t make them the best team you’ve played this season ‘by far.’

Players will always be drawn to Florida State given its history and success, there’s no questioning that, but that doesn’t bolster them to the top team on your schedule.

Speaking of schedules, Clemson’s from here on out is rather hysterical with a home game against Wake Forest and a visit to an average South Carolina team are the only two games you could semi-circle as tough games left on the slate.

We all understand you have to motivate your team that hasn’t been dominated this year, but hyping up the ‘Noles, which every college football fan knows is a below-average team, is something we’re going to see through.