Fan Surprises Dad With Tickets To The National Championship And I’m Not Crying, They Are 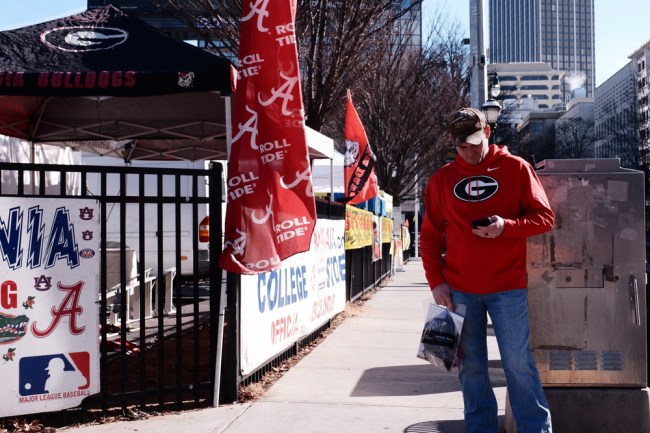 It’s arrived. The 2017/2018 College Football National Championship is just a few hours away. The Georgia Bulldogs are poised to have an overwhelming home field advantage tonight in Atlanta. Not because of geography but mostly because Alabama fans have been to so many National Championships over the past decade they’ve stopped paying for tickets. I know this because I went to the Clemson vs. Alabama game last year and it was 2-to-1 Clemson fans in the stands. The same will be true for UGA fans who have been waiting for their team to return to the Natty for years.

One fan, Twitter user @mckelsey19, surprised his dad with tickets to tonight’s National Championship. He surprised his dad who is a lifelong UGA fan with the tickets along with a letter explaining it. Now, if you happen to get choked up while watching this video I want you to know that you’re not alone:

This morning I had the privilege of surprising my father with tickets to see our Georgia Bulldogs play in the 2018 #CFPlayoff National Championship Game. #GoDawgs pic.twitter.com/rx1nuVk9II

Jeez. I just went to Portugal for 8 days, had my dad watch my dog the entire time I was gone, and all I brought him back was a few cans of sardines and mini bottles of Tawny Port. Sure, the sardines are actually a Portuguese delicacy but I’m suddenly feeling like shit after watching this video. I’m realizing that I’ve never been able to buy dad a gift that elicited this level of reaction.