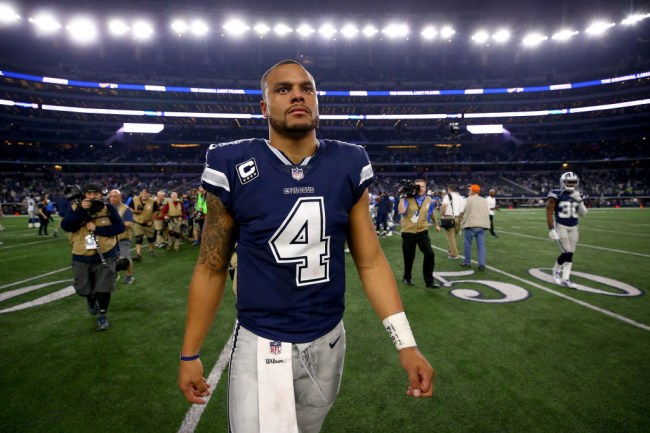 To no real surprise, Dak Prescott and the Dallas Cowboys did not reach an agreement on a long-term deal before Wednesday’s deadline passed. Now, the two-time Pro Bowler will play this season on a franchise tag where he will make $31.4 million.

That sum of money, plus the fact a long-term contract wasn’t signed, simply isn’t good enough according to Prescott’s older brother, Tad.

Tad jumped on Twitter to blast the franchise pointing out that he may not be cheering for the team much longer.

“There is a reason I was never a @dallascowboys fan growing up or before they drafted @dak after today, who knows how much longer I’ll be cheering for them.”

I’m sure this tweet really struck fear into Jerry Jones and the Cowboys.

While it’s perfectly fine for Prescott and those around him to be frustrated about not reaching an agreement on a long-term deal, threatening to not cheer for the team is about as ineffective as an intimidation tactic imaginable.

It’s also worth pointing out the small little detail that Prescott reportedly turned down a new deal worth $33-35 million annually with $110 million guaranteed and $70 million owed over the first two years and included a $50 million signing bonus.

A quarterback with a 1-2 playoff record turning down a contract guaranteeing $110 million certainly is something.

Whether it be the Cowboys or another team down the line, Prescott is going to get paid, but there really isn’t too much to complain about when looking at those numbers.