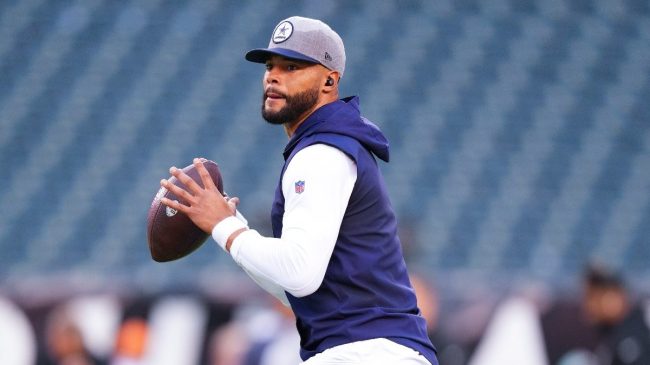 The Dallas Cowboys have been surprisingly competitive while Dak Prescott has been nursing his thumb injury. However, thanks to Jerry Jones, there’s been some dramatics the fanbase isn’t excited about. Regardless, it sounds like Prescott could be returning soon and it has fans losing their minds with excitement.

According to Jane Slater, head coach Mike McCarthy claims that “Dak Prescott has been cleared medically to play.” The coaching staff will have the Cowboys quarterback throwing 40-50 balls at practice on Thursday. This is excellent news for Dallas, as they’re on track to have their starting quarterback under center at an opportune time.

Dak Prescott (thumb fracture) has been cleared medically to play according to #Cowboys HC Mike McCarthy. Tomorrow expect him to throw 40-50 balls at practice

The Cowboys are currently 4-2 entering Week 7 of the regular season. Although Cooper Rush has done a fine job, Dallas will give the reigns back to Dak Prescott once he’s ready. With how things are going, that could be the next game against the Detroit Lions. For that reason, fans are going nuts over the great news.

Most Cowboys fans are feeling this way.

This could shake things up in the NFC East down the road.

Thank god we got our backup QB back!

It’ll be interesting to see how the Cowboys bring Dak Prescott back as the starting quarterback. It might be smart to keep focusing on the run game for another week or two until Prescott gets more comfortable under center. Either way, this is stellar news for this franchise and the fans are clearly happy to have him back.