Dak Prescott Praises Dez Bryant, Says He ‘Looks Good’ And Should Be On A Team 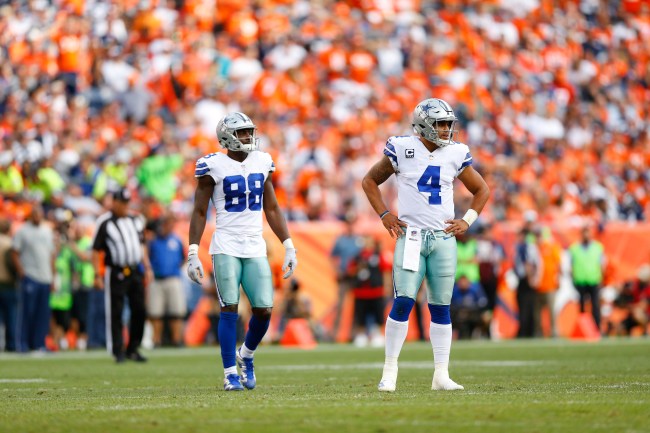 Did you know that Dez Bryant is still somehow just 31-years-old? For some perspective, Atlanta Falcons stud Julio Jones and Cincinnati Bengals stalwart AJ Green are also 31-years-old. Emmanuel Sanders, who just signed a brand new 2-year contract with the New Orleans Saints this offseason, is 33. Pats legend Julian Edelman is also 33. And don’t forget about Larry Fitzgerald, who is still puttin’ up numbers at the age of 36-years-old (he had 75 catches for 804 yards and 4 TDs last season)!

My point is that while Dez Bryant hasn’t played in the league since 2017, it’s not as if he’s entering into a retirement home anytime soon, as he remains the same age as some of his contemporaries. So, if the once-dominant wideout is still relatively young, then why is he out of the league? Is it a personality concern thing?

Dallas Cowboys quarterback Dak Prescott is reportedly just as confused as I am, as it was recently reported that the Cowboys franchise QB says that Dez “looks good” and “should be on a team”.

"I got a text from someone who said Dak is telling people that Dez looks good and should be on a team" – @BryanBroaddus bombshell!

Bryant — who played for the Dallas Cowboys from 2010 to 2017, making three Pro Bowls and one All-Pro first-team during that time — hasn’t played in the NFL in three years. Back in 2018, he briefly signed with the New Orleans Saints before unfortunately tearing his achilles tendon just two days into his tender. He then spent the next year rehabbing and remained out of the league last season.

Unfortunately for Dez, at this point, it appears as though the league has moved on, even if he does now have Dak’s seal of approval.