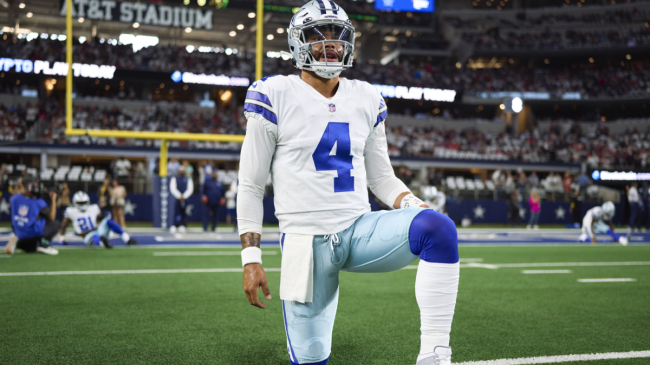 The Cowboys now have a better understanding of when Dak Prescott could return to the lineup. The passer injured his hand in Sunday night’s loss to the Bucs and was expected to miss 6-8 weeks depending on severity.

That timeframe appears to be intact following a successful surgery on Prescott’s fractured thumb.

NFL insider Ian Rapoport reports that the quarterback will now be looking for a successful return to the field on either Halloween weekend or November 13th. Dallas plays the Bears and Packers over those two weeks with a bye in between.

Dak Prescott is looking at a possible return for either the Oct 30 game vs the #Bears or after the bye, Nov. 13 against the #Packers. https://t.co/KRmADXTOSt

That would put the passer back on the field around the midway point in the season. Fans have been quick to comment on the potential return on social media.

Should Prescott come back by October 30th, it would come in the Cowboys’ eighth game of the year. Should he have to wait until after the bye, he could be cleared for Game 9.

Dallas fans are hopeful that the team can hold steady while their starting signal caller is on the sidelines. If so, they believe a playoff run is still a possibility.

4-4 until he comes back and we in business https://t.co/HQcCiEjIEM

Others, however, aren’t so sure. Many are saying the postseason will be well out of reach when Prescott returns to the field. One fan wrote, “Will be pretty fitting to return on Halloween because the Cowboys season will be complete horror by then.”

Will be pretty fitting to return on Halloween because the Cowboys season will be complete horror by then.

Another person says the Cowboys will be 2-5 by the time Week 8 rolls around. That’s not out of the question considering the schedule, which includes the Bengals, Rams, and Eagles.

Time will tell on how the recovery process goes for Prescott over the coming weeks. For Dallas’s playoff hopes, he’ll likely need to return sooner rather than later.