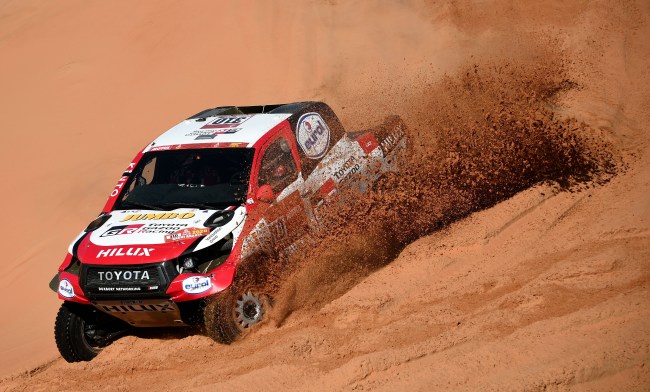 The Dakar 2020 race wrapped up while most of us in the USA were sleeping. Two-time World Rally champion Carlos Sainz Sr. security his third career Dakar Rally victory on the year when this race was held in Saudi Arabia for its first time.

If that name sounds familiar, it’s not a coincidence. Carlos Sainz Sr. is the father of McLaren Formula 1 driver Carlos Sainz Jr. This victory is unique because Carlos has now won the race with three different autos (X-raid Mini, Volkswagen in 2010, and Peugeot in 2018). But I digress. We’re all here to see the wild crash, right?

Toyota racer Fernando Alonso and his co-driver Marc Coma finished Dakar 2020 in 13th place, a full 4 hours, 42 minutes, and 47 seconds off the winner’s pace. They were only 3m25s off the final stage 12 pace. But this scary moment came during low-visibility conditions during Dakar 2020’s second stage.

According to The Drive, this occurred just 2 miles into the 332-mile Stage 2. The driver ‘locked his brakes’ just before the crest of the sand dune and was sent careening into a 720-roll down the sand. Everyone looked on in astonishment and some rushed to help before being waved away as the team kicked it back into action and drove away.

Here are two views of this wild crash:

While the team was able to haul ass away from this action it eventually cost them precious time:

Being tough sons-of-guns, Alonso and his co-driver Marc Coma fired the Hilux back up within seconds of coming to a stop, doing so before onlookers even had a chance to check on the truck’s occupants. Alonso threw the truck in gear and peeled off to continue the race, though the penalty for his roll was more severe than a few lost seconds—damage sustained during the tumble took Alonso and Coma some 68 minutes to fix, as the pair reportedly had to kick the windshield out to see where they were going. As of the end of Wednesday, Alonso and Coma sit 14th in the race’s standings. (via)

For what it’s worth, American racer Ricky Brabec won the Bike race for the Monster Energy Honda Team with an overall time of 40h2m36s, finishing just over 16 minutes ahead of Chile’s Pablo Quintanilla. Americans Skyler Howes and Andrew Short finished 9th and 10th in the Bike category respectively.

For a full rundown of the finishing times and results, you can click here to visit the Dakar 2020 website.