The Dallas Cowboys Tweeted Out An Application Form For Bandwagon Fans, Will Now Lose The Game

The Dallas Cowboys square off against the Green Bay Packers in the Divisional Round of the NFL Playoffs this Sunday at 4:40 pm.

It’s been one hell of a year for the Cowboys and their fans. Dem Boyz have only lost 3 games all year (two to the Giants), and they’ve got a 7-1 win-loss record at home which has them feeling pretty fucking confident going into Sunday’s game…So confident that the Dallas Cowboys are doing a bit of showboating by tweeting out this application for ‘bandwagon fans’.

I don’t really understand this move, as Dallas is a franchise who was built entirely on the backs of bandwagon fans, and tweeting an application making fun of bandwagon fans is kind of biting the hand that feeds them. If anything, this ballsy move seems like something that just sealed Dallas’ fate in the NFL Playoffs on Sunday: 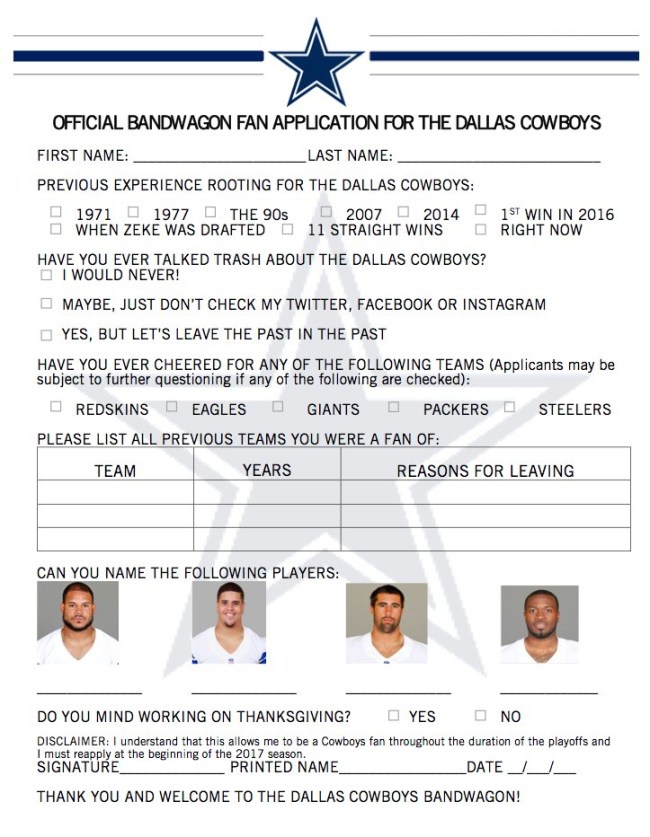 It is refreshing to see an NFL team having fun with the notion of bandwagon fans, but I just worry the Cowboys are the wrong team to do this because it alienates a large portion of their fanbase.

P.s., I’M NOT SAYING ALL COWBOYS FANS ARE BANDWAGON FANS SO DON’T GET PISSED OFF IN THE COMMENTS. I’m just saying that there are disproportionately more bandwagon fans rooting for the Cowboys than other teams.

RELATED: Dez Bryant Goes On Rant About ‘Fake Cowboys Fans’ Telling Them To Jump Off The Bandwagon After Sunday’s Win