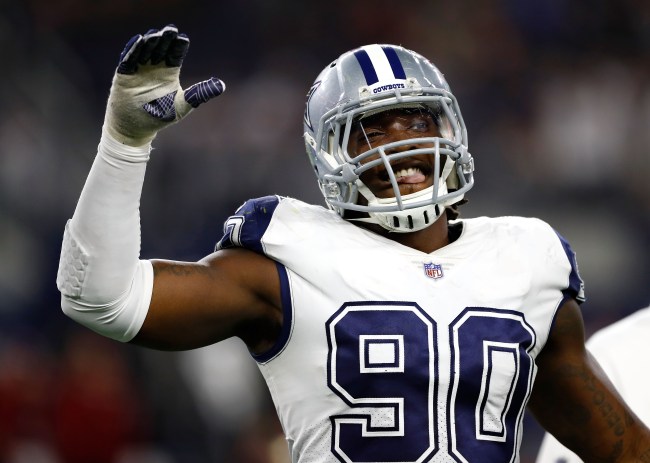 As a sports fan, I can tell you that I’ve seen the strangest things in my life. I’ve seen an underdog take down a heavy favorite. I’ve seen crazy plays that left my jaw dropped. I’ve seen plays that shouldn’t be possible to happen, happen. So it’s not completely out of the realm of possibility that the 6-5 Dallas Cowboys can beat the 10-1 New Orleans Saints this week on Thursday Night Football. And, if you ask Dallas defensive end DeMarcus Lawrence, that’s exactly what’s going to happen.

Just look at what Lawrence said when asked about the game plan against the Saints’ offensive line.

DeMarcus Lawrence keeps it real on the Saints. pic.twitter.com/ay8mrEZN0f

You’ve got to love that kind of confidence, but, man, is DeMarcus Lawrence taking the hits on Twitter for being so candid with his response. After all, the Saints boast one of the NFL’s most lethal offenses, scoring an insane 37.2 points per game and winning by an average margin of 14, so the Dallas Cowboys have their work cutout for them this week.

As to the non-bleeped content: It's good that DeMarcus Lawrence isn't scared, and he shouldn't be. But the Saints are averaging 37 points per game and winning by an average of 14, over an 11-game sample. The notion that it's smoke-and-mirrors doesn't hold up.

And, seeing as how the Cowboys have struggled all season long — although, to be fair, they have looked better the past couple of weeks — Twitter reminded DeMarcus Lawrence that he might want to be careful for poking the bear that is the Saints offense. The comments got the attention of New Orleans wide receiver Michael Thomas, who kept things simple in his response.

Don’t bite off more then you can chew.

The rest of social media seemed to laugh at DeMarcus Lawrence’s comments, kind of reminding him that he may want to be careful. Take a look at some of the reactions.

Friday morning DeMarcus Lawrence is going to be just like Vic Beasley ever since last Friday morning: a ghost.#Saints

If Aaron Donald ain’t go off against the Saints o-line, the fuck make you think DeMarcus Lawrence will???

On behalf of the entire Who Dat Nation I’d like to say thank u to Demarcus Lawrence. U just guaranteed Petty Sean Payton is showing up Thursday pic.twitter.com/yx9gkqUTgO

Who the fuck is DeMarcus Lawrence? https://t.co/CdQKiCJtBj

As mentioned above, I’ve seen some crazy sh*t in my day when it comes to sports, and think that the Dallas Cowboys can at least compete with the Saints — for about a quarter. But, when a team has Drew Brees, Michael Thomas, Alvin Kamara and Mark Ingram, just to name a few weapons, it’s a tall task to think that a mediocre team like the Cowboys can take them down. Good for Lawrence for speaking his mind and being confident, though.