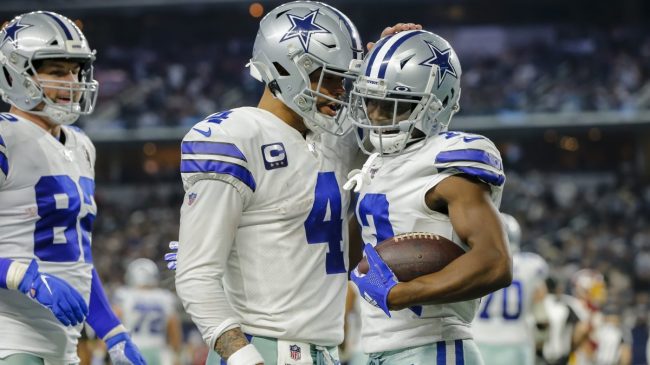 The Dallas Cowboys have been absolutely ravaged by injury early in the 2022 NFL season. All-Pro left tackle Tyron Smith went down before the season even began. Then Pro Bowl quarterback Dak Prescott got injured in the first game of the season against the Tampa Bay Buccaneers.

Along the way, the Cowboys have also dealt with a number of injuries to key role players such as tight end Dalton Schultz, guard Connor McGovern and safety Jayron Kearse. But one injury that has often gone overlooked in that of wide receiver Michael Gallup.

Gallup caught 35 balls for 445 yards and two touchdowns in just nine games in 2021. He then tore his ACL in the team’s final home game of the regular season against the Arizona Cardinals.

Dallas drafted Gallup in the third round of the 2018 NFL Draft and he’s been a key contributor for America’s team ever since. He combined for 125 catches, 1,950 yards and 11 touchdowns in the 2019 and 2020 seasons and became one of Dak Prescott’s most reliable weapons.

Gallup was expected to play a big part in the Cowboys’ 2022 offense after the departure of Amari Cooper to Cleveland. But there was no clear timetable for his return from injury.

Now that’s no longer the case.

Gallup was a full participant at Dallas practice this week and the Cowboys removed him from their injury report according to Jori Epstein of Yahoo Sports.

Epstein also reported that Gallup was a full participant last week. But the Cowboys designated the wide receiver as questionable ahead of their game with the New York Giants.

(For context, Gallup was considered a full participant last week in practice but deemed "questionable" on final game report after he didn't feel right from a practice play. Not so this week.)

With Prescott close to returning, the Cowboys could yet challenge the Philadelphia Eagles for the NFC East crown.