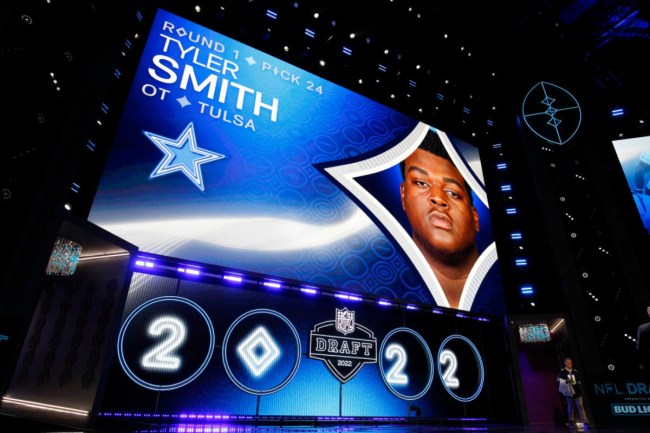 It’s never not funny when a tweet backfires in someone’s face, and that’s especially true when it comes to the sports world. During the first round of the NFL Draft on Thursday night, we saw a tremendous mess-up unfold right in front of our eyes.

Bob Strum covers the Dallas Cowboys for The Athletic and also co-hosts an afternoon show for 1310 The Ticket. As someone who is certainly plugged in with the franchise, he decided to make a very risky statement about who the Cowboys may, or may not in this case, draft in the first round.

“If they take Tyler Smith in Round 1, I will submit my retirement papers,” Strum tweeted as a number of mock drafts had the former Tulsa offensive lineman landing with Dallas.

Well, fast-forward to Thursday night and the Cowboys called Smith’s name with the 24th overall pick in the draft.

Sturm got called out by plenty of his followers on Twitter after Smith was drafted and joked after the fact.

It was a great run, guys. Love you. https://t.co/dLKCuLxVLf

Maybe the wildest part about the situation is that Sturm double-down on his opinion that Smith isn’t the right guy for the Cowboys. He proceeded to tweet videos of why he was scared off by Dallas drafting him.

And this one was troubling. pic.twitter.com/CKPRZBADsY

Sturm certainly won’t stay true to his word given he fired off his ‘I’ll retire’ tweet with tongue-in-cheek, but it certainly makes for an interesting scenario if and when he talks with Smith in the future.