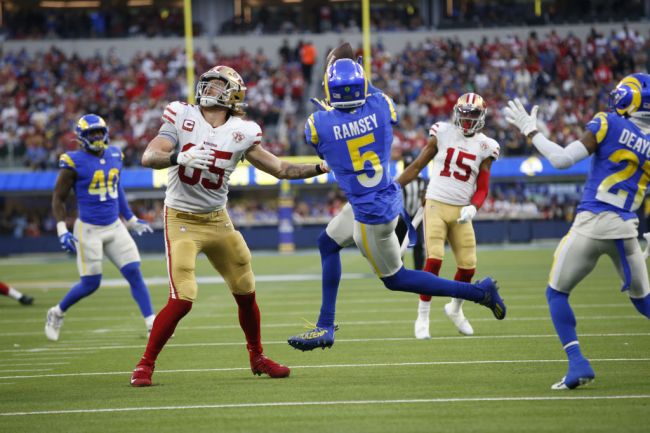 Jalen Ramsey’s career is in a pretty great place right now. He is widely regarded as one of the league’s top defensive players, has been named to 5 consecutive Pro Bowls, and has been a First-Team All-Pro in 3 of the last 5 seasons. He also just won a Super Bowl.

Today, he appeared on Ryan Clark’s “Pivot” podcast that his career almost got off to a very different start than the one we ended up seeing. According to Ramsey, the Dallas Cowboys told him that he was available at pick 4 in the 2016 NFL Draft.

.@jalenramsey says that the #Cowboys told him they'll draft him 4th overall in 2016 during his visit in Dallas.

Ramsey was on the board, but the Cowboys instead took RB Ezekiel Elliott.pic.twitter.com/SwLo7Fhlq1

The Cowboys wound up selecting Ezekiel Elliott with that pick instead of Ramsey and it has to be a decision they have regretted for the past few years.

While Jalen Ramsey has been experiencing incredible individual and team success, the Dallas Cowboys have disappointed fans while paying Ezekiel Elliot way too much. Zeke has simply not lived up to the expectations for a player selected 4th overall and then handed a contract worth $15 million per year.

Over the last couple of seasons, Elliott has been an inefficient runner and has seemed to have lost a step. He has averaged 4.0 and 4.2 yards per carry in those seasons while his backup, Tony Pollard, has averaged 4.3 and 5.5 behind the same offensive line. There have even been times that Pollard has appeared to be the better running back of the two.

Ramsey is a player who could have made a real impact for the Dallas Cowboys. It was only a couple of years ago that they had one of the worst pass defenses in football. Even now that their defense has rapidly improved, they could be even better if they had paired Trevon Diggs with Jalen Ramsey. That would be a truly formidable defense.

The real kicker here is that in the time since this pick, Ramsey has helped a Jaguars team quarterbacked by Blake Bortles make an AFC title game appearance and the Rams win a Super Bowl. Since drafting Elliott, the Cowboys have won one playoff game and haven’t made it past the divisional round.

Every time the Cowboys sign a check for Ezekiel Elliott these days, they have to be thinking about what could have been with Jalen Ramsey