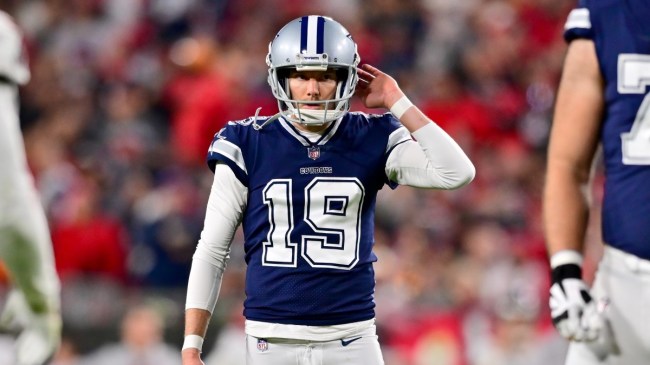 On Monday night, Dak Prescott and the Dallas Cowboys were able to beat the Tampa Bay Bucs in the Wild Card game with relative ease.

The “relative” part of that sentence comes from the fact that their kicker Brett Maher astonishingly missed four of his five extra point attempts (PATs) during the game, which has obviously led to some cause for concern amongst Cowboys fans.

Heading into the NFC Divisional Round matchup against the San Francisco 49ers this weekend, the Cowboys — who claimed they’re sticking with Maher — signed kicker Tristan Vizcaino to their practice squad.

If neither Maher nor Vizcaino works out, though, the Cowboys could always give wide receiver T.Y. Hilton a shot, as he was sure to remind the media this week that he was quite a kicker when he was younger.

Well, it turns out that the Cowboys already have a player with experience kicking on the roster… receiver T.Y. Hilton.

“Yes, I have in Optimist [youth football],” Hilton said on his kicking experience. “It was good. I made a lot of kicks, a lot of game-winners.”

Hilton the kicker? Who knew? So is the veteran, who is a four-time Pro Bowl receiver, ready to take over from Maher?

“Man, Brett’s got that. He’s good,” Hilton said with a smile. [via Sports Illustrated]

As mentioned above, Hilton, Dak Prescott, and the Dallas Cowboys will be taking on the San Francisco 49ers in the NFC Divisional Round game on Sunday at 6 p.m. The other NFC divisional round matchup will feature a clash between the #1 seed Philadelphia Eagles and the scrappy New York Giants.

Over on the AFC side of the NFL playoffs, the #1 seed Kansas City Chiefs will host the Jags on Saturday before the Bengals take on the Buffalo Bills on Sunday.