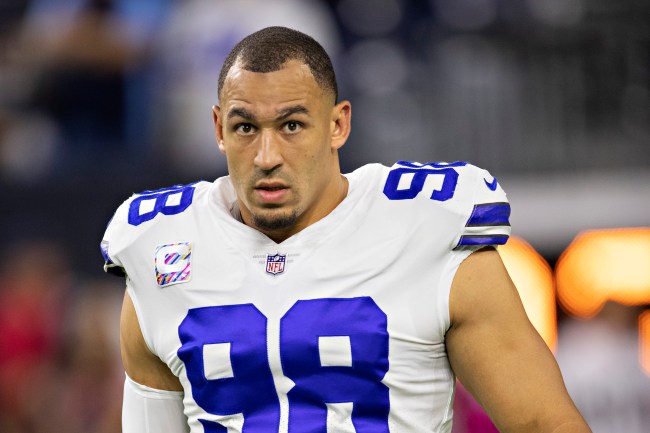 In the video you can see Crawford fighting off a group of bouncers at the Coyote Ugly Saloon in Panama City.

The video shows Crawford — 6’4″, 280 lbs. — fighting off a team of bouncers at the Coyote Ugly Saloon in Panama City Beach, Florida on March 15.

Unclear what started the brawl … but it escalated VERY quickly — with at least FOUR big bouncers desperately trying to subdue the NFL player, who is just too powerful to overcome.

Crawford is just wrecking everyone — using brute strength and powerful punches to take down everyone in his way.

Another video shows Crawford getting into it with police oficers outside of the bar.

Here's the video from the Tyrone Crawford bar incident

According to TMZ the NFL attempted to get a hold of the bar brawl video but weren’t able to do so.

As we previously reported, the fight spilled outside and cops were called to the scene … where Crawford continued to get physical with multiple police officers.

There is video that shows Crawford barreling through 2 cops and then shoving 2 other cops while they are trying to arrest a man allegedly involved in the bar fight.

Crawford was NOT arrested that night and has not been charged with a crime.

The NFL went to the bar on Tuesday in an effort to view surveillance footage and collect information on the incident. Unclear if the bar allowed the investigators to watch the video.

While Crawford was not arrested during the incident he is currently being investigated by the NFL.