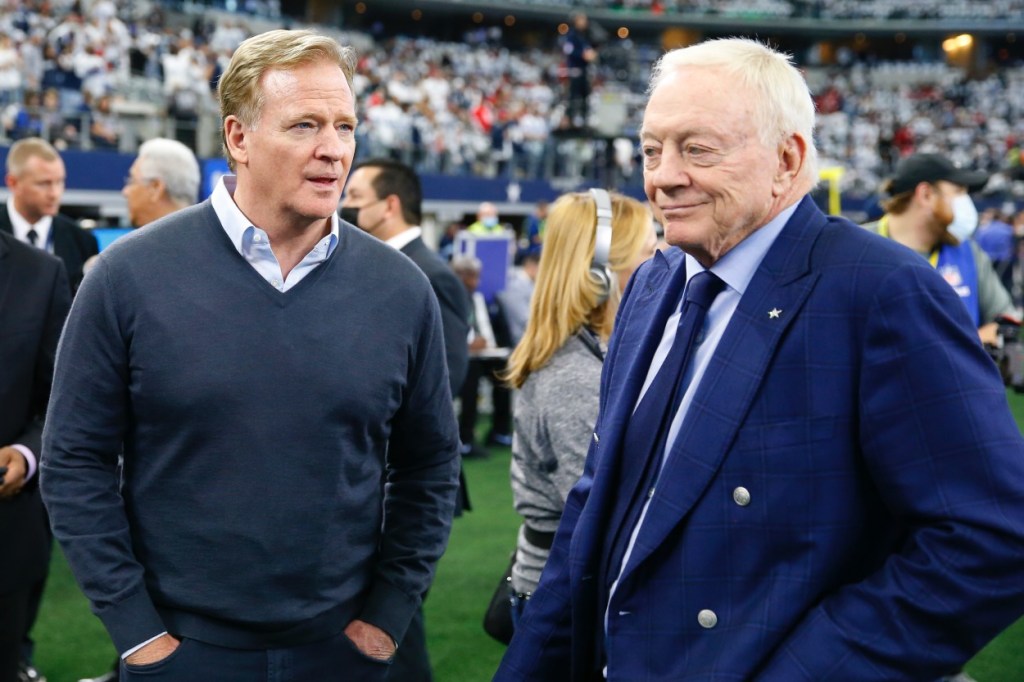 The Dallas Cowboys are the most valuable franchise in the world. Not just the NFL, that’s across all sports. Jerry Jones’ Cowboys are valued at $5.7 billion followed by the Yankees at $5.25B, Knicks at $5B, FC Barcelona at $4.76 billion, and Real Madrid at $4.75 billion.

Current Dallas Mayor Eric Johnson recognizes that his city presides over the biggest sports franchise on the planet and he sees that as an opportunity to bring in a second team. New York City supports two NFL teams and so does Los Angeles, so why couldn’t Jerry Jones and the Dallas Cowboys make room for an AFC team?

Last week, the Dallas Mayor started up a Twitter thread about why Dallas should bring in a second NFL team, an AFC expansion team, and he then later followed it up with more tweets. In the second thread, he explained why he believes Jerry Jones wouldn’t be against the idea. Let’s check it out:

The answer is Dallas. Why? We are about to pass the Chicago metro and become the #3 metro in the US, which would make us the largest US metro WITHOUT 2 teams. Football is king here. Dallas needs an expansion team and we would be able to sustain 2 @NFL teams better than LA or NY. https://t.co/ikG0oeZq4T

We need an AFC team that plays in Southern Dallas. It would never want for a fan base or attendance or support from the City of Dallas. Who wouldn’t want to see a Dallas versus Dallas Super Bowl…in the City of Dallas?😎

So which AFC team do you want to see move to Southern Dallas? @chargers or @Jaguars 🫣

Dallas is the fastest growing metro area in the nation. All of the former ‘suburbs’ of Dallas are exploding into cities of their own. There was a recent episode of the Freakonomics podcast titled ‘Why Is Everyone Moving to Dallas?’ that’s fascinating and explains what’s happening there.

I lived in Dallas for a year but it’s been a while. I can’t say I have much insight into the current state of Dallas aside from that podcast episode but I’m still willing to bet that the Cowboys are King and any new AFC expansion team would be fighting tooth and nail to gain fans. That said, Dallas Mayor Eric Johnson went in on another thread about why Jerry Jones might support or at least not fight the initiative.

A Second NFL Team To Dallas???

Why do folks assume Jerry Jones would be afraid of this at this stage? It’s kind of an insult to him: the most valuable sports (not football, sports) franchise on Earth afraid of an expansion AFC team in South Dallas? I’ve spent time with Jerry Jones. Don’t speak for the man.😉💯

Jerry Jones owns the crown jewel of the @NFL. I don’t think the @Lakers or @Yankees are bothered one bit by the existence of the @LAClippers or @Mets. Cowboys are a stronger brand with a more global fan base than either of these two. You’re underestimating Jerry Jones AND DALLAS!

Jerry Jones knows better than anyone how valuable his team is and how unwavering loyalty is from Dallas Cowboys fans. and honestly, this isn’t that radical of an idea. I’d wonder why Dallas would get a second team before Austin got a first with the recent population growth there. But the current metro population of Dallas-Ft. Worth is 6.488 million. That’s more than enough residents to support a second NFL team.

What Are Cowboys Fans Saying About The Mayor’s Jerry CJones Comments?

Jerry Jones won't allow that to happen! No f*%kin way! He's against expansion in Texas at all. Just ask San Antonio, soon to be the 6th largest city in the country

The City of Dallas won’t be allowing any more teams who don’t actually have any of their assets located within our city limits use our name, so if the NFL wants the Frisco Chargers or Frisco Jaguars to be their next expansion team, that’s their call.

Never gonna happen and they should put a team in SanAntonio/Austin area first.

An MLB team in downtown would be much better.

The Dallas Cowboys are the most valuable sports franchise on the planet and Jerry Jones sits comfortably as the owner. But it has been A LONG TIME since they’ve seen success in the NFL Playoffs.

That’s really the only thing that’s tripping me up with this plan. If they run into a Las Vegas Golden Knights situation where a team shows up as an expansion team and starts making the playoffs every year it would make the Cowboys look horrible. Jerry Jones would have none of that.

What do you guys think, could Dallas support a second NFL team?