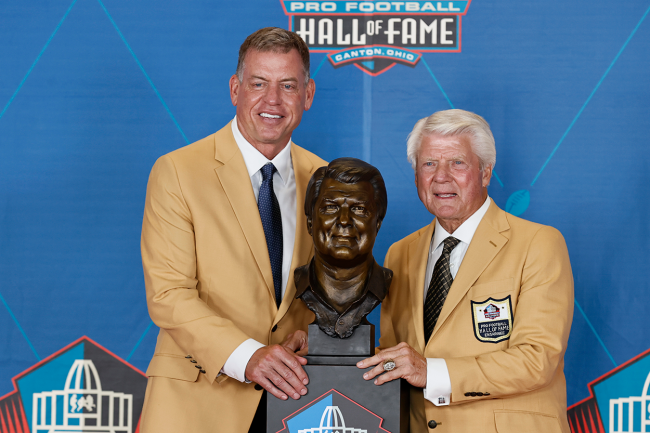 Jimmy Johnson and Troy Aikman had themselves a Saturday. The former Super Bowl-winning coach and his quarterback spent the day on the Florida Keys crushing some brewskis with the boys.

And they weren’t just any beers. They were some cold cans of Aikman’s Eight Elite Light Lager.

In a photo of just the two of them shirtless together on the boat, the 55-year-old Aikman looks absolutely jacked. He’s in fantastic shape and his arms are as strong as they were back in his playing days.

Of course, as the photo began to make its rounds across the internet, football fans were astonished by how fit that Aikman is at his age.

Troy is fucking shredded. met him a couple weeks back and it’s wild how big he is

Others had jokes and quips.

I’m already excited for the shirtless pic of Dak and Mike McCarthy together on a boat 25 years from now. https://t.co/KTM6T7Prbv

Some credit is due for Johnson as well. He looks great for 78!

However, it was Aikman who stood out. Despite being more than 20 years removed from the National Football League, he is still absolutely shredded.

Earlier this year, Aikman gave a behind-the-scenes look at his workout, diet and supplements.

Aikman’s routine includes a lot of dumbbell work and five or six days of cardio. As for what he eats, the three-time Super Bowl champion has a cheat meal once every two or three months, where most people have one a week. He stays on a strict regimen and always carries a gallon of water with him to stay hydrated.

Aikman has stuck to the same program for the last 15 years and, clearly, it is working.