The Lions Tried To Stop Dalvin Cook With 10 Defenders, Gave Up 70-Yard Score Instead 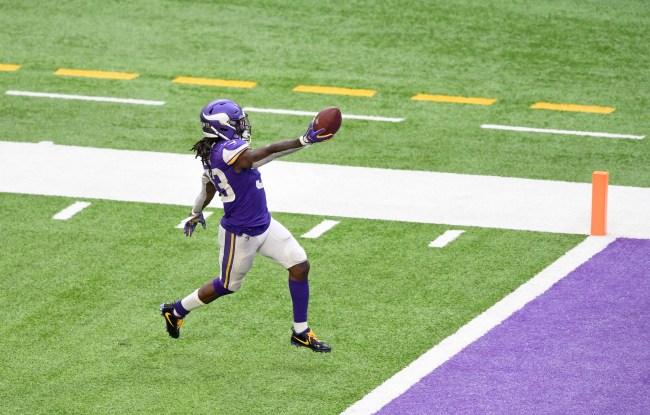 Sunday’s victory over Detroit was never in doubt for Minnesota behind Dalvin Cook’s incredible afternoon. The Vikings’ third-year running back carried his team and the team of his fantasy owners for the second-straight week behind 206 yards rushing, 46 yards receiving and two touchdowns. His longest run of the day came in the fourth quarter and went for six. Cook took the handoff inside his left tackle, behind the lead block of a pulling right guard and went virtually untouched for 70-yards and Minnesota’s final touchdown of the day.

It was an impressive run that capped off an impressive day. However, upon further review, Cook’s big gain was assisted by a lack of tacklers on the other side of the ball. Only 10 defenders were on the field for the Lions before the snap.

If you look closely at right outside linebacker Jamie Collins, he noticed the missing man before the play happens and signaled over to the sideline.

It was a little bit too late. Kirk Cousins snapped the ball, and Cook went streaking to seal the 34-20 win.

The Lions are 3-5 with the loss, while the Vikings match their record with the win and tie for third place in the NFC North. Cook’s impressive day came on the heels of a four total touchdown game against Green Bay last weekend, and Minnesota seems to live or die by its running back. All three of the team’s wins have come on days where Cook breaks for over 100 yards. He has reached that numbers on four occasions this season, with one having come in a one-point loss to Tennessee in week three.