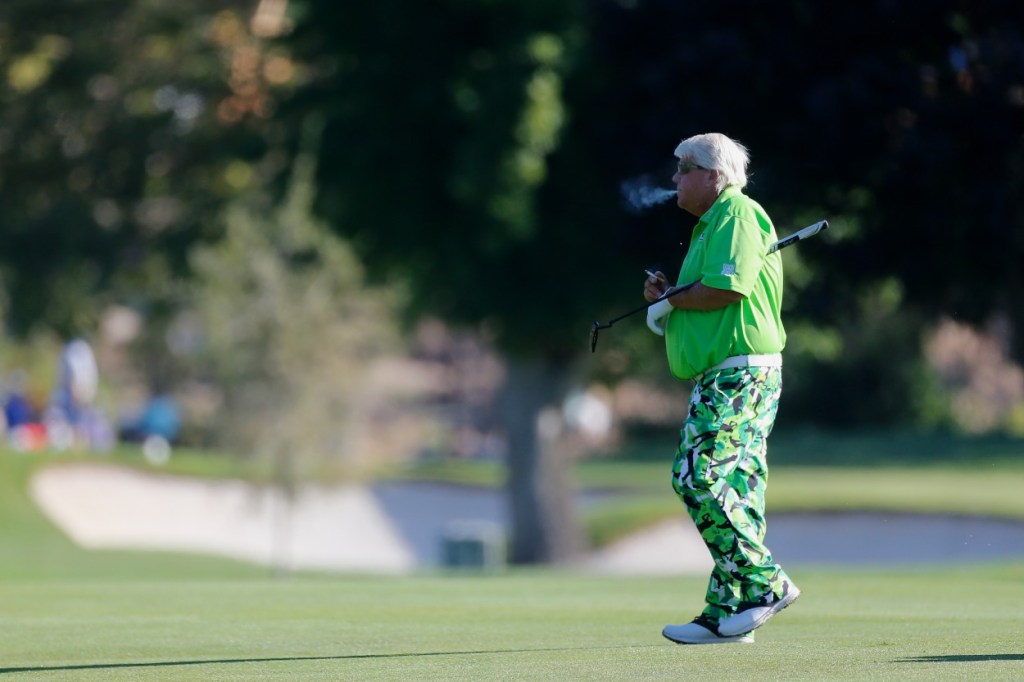 Drinking beer on the golf course isn’t for everybody. Neither is ripping darts on every hole. But for John Daly, it’s par for the course and for the Daly Cup, golf’s unofficial 5th Major, it’s a celebrated way to play the game.

I wrote an article about this back in 2018 after an experiment where guys of 3 different handicap levels hit a serious of shots at different levels of inebriation. But a Texan by the name of Brendon Morris decided to go one step further and test what it would be like to play golf as John Daly by creating the Daly Cup.

This past weekend marked the 3rd annual Daly Cup. It’s jokingly referred to as ‘Golf’s 5th Major’, a term that’s usually reserved for The Players. John Daly is NOT involved, it is just a tribute to the man. And the rules are pretty straightforward as far as golf tournaments go.

– 2 Man Scramble
– Dress like John Daly
– 24 beers per team, each beer -1 stroke
– Unlimited mulligans but take a shot before swinging

Interestingly, many golf courses don’t allow outside alcohol to be brought on the property. If the course has a liquor license they could potentially lose it if people are bringing in outside alcohol so the Daly Cup requires finding a BYOB course.

This really does seem to harness the essence of John Daly’s approach to golf.

The 3rd annual Daly Cup was held at Squaw Creek Golf Course which is just west of Fort Worth, Texas. It brought out 60 golfers, all dressed up as John Daly, and all of them ready to crush beers on the course.

I also asked him about the type of liquor everyone was using for shots. It’s not going to be a winning strategy to rip shots of 130-proof alcohol in the Texas Summer sun when you could be shooting low ABV liquor. He says most of the field was carrying Pink Whitney pocket shots (30% ABV / 60-proof). He also told me

All the ringer/drinker teams fizzled by the end (ask ringer @mjheald). Typically the mid handicappers that know how to party are the ones there at the end. Lots of @pinkwhitney pocket shots were used in most groups.

Daly Cup founder Brendon Morris also told me that due to the nature of everyone drinking on the course, the event polices itself by having teams keep track of their opponent’s scores and vice versa.

Easiest part is it polices itself. We trade scorecards at the beginning of the round in each group, so the two other guys in your group are keeping your score and beer/mulligans, and you’re keeping there. Turns into an awesome day with a lot of side bets. Come on out next year!

As for what the inspiration behind the first Daly Cup was, Morris had this to say:

“I had the idea for my bachelor party. 14 of us went to Myrtle Beach and I wanted to do it on the first of 3 rounds. It was a hit and everyone on the course thought we were buffoons. Enough friends from home saw it after we posted about it that we had enough to get 48 out last year. This year I capped it at 60, but could’ve easily been 90-100 if I had the energy to lock down the last groups.”

It’s OFFICIAL: John Daly is on board for the Daly Cup IV

After this story went viral in mid-August, the man, the myth, the legend himself, John Daly got wind of it. He has now responded and said he’s all-in on Daly Cup.

John Daly responded to the Daly Cup founder saying he wants to work together on Daly Cup IV and raise some much-needed money for charity. Here’s Daly being Daly:

Daly Cup IV is about to be the weekend of the year.

All signs indicate that Daly Cup IV will be so overwhelmingly fun the world of golf will never be the same. If you are at all interested in golf, John Daly, and raising money for charity then throw the ‘Daly Cup’ a follow on Twitter and/or Instagram for updates on next year’s event!

Here are some pictures from this year’s Daly Cup. My hope is that John Daly himself sees this and shows up next year kind of like how Jonah Hill famously showed up to Jonah Hill Day.

12 beers/golfer is a LOT in the Texas Summer sun. But you’re sweating out a few of those beers, right? (I know this isn’t at all how it works, you don’t need to email me about it).

Some potential ways to spice up this event?

John Daly is just built different. Everyone knows that. And I think the Daly Cup could lean into the diet aspect of John’s life a little bit as well.

In a typical round, John Daly might smoke over a pack of cigarettes and eat 6+ packs of peanut M&M’s. And that’s just what the public can see. Who knows what he’s eating/drinking on his own time during a round?

I’d love to see a hotdog-per-hole rule. Maybe some deep-fried Twinkies incorporated for mulligans as well, or something that would sink a golfer’s stomach to the point that they’d really have to strategically think about what was going into their body before choosing to hit a mulligan.

We could really spend a LONG time talking about strategy for the Daly Cup. Is it better to stay sober on the front and get AFTER it on the back-9? Do you calculate after Hole #12 that you’ve got 6 holes left and can easily get away with 6 shots so you start using those mulligans real fast? Or do you slow drip all day? I’m really not sure what the best strategy is but I’m interested in learning more.

Follow the @DalyCupFW Instagram account for the latest official Daly Cup updates. That’s where you will be able to learn more about next year’s event. Maybe I’ll see some of you guys there?

John Daly ripping darts at one of the most historic venues in sports is perfectly on-brand 🚬 https://t.co/VlmWRJNiVC