Damian Lillard Defends Ex-Teammate Caleb Swanigan, Who Bounced Around Homeless Shelters As A Kid And Whose Father Died Of Obesity When He Was 16 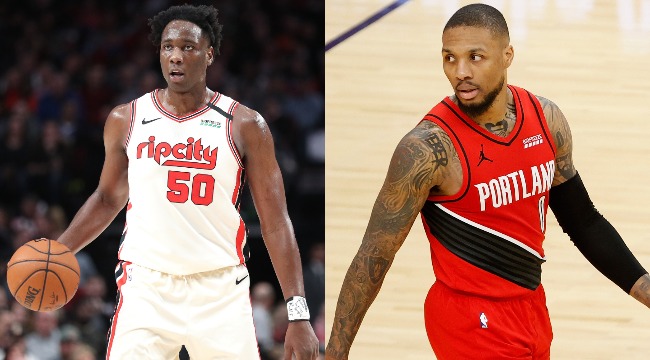 Caleb Swanigan is having an awful week.

Yesterday, the 24-year-old appeared in court after pleading guilty to a December 2020 drug charge whereby officers found 3.4 pounds of marijuana and $3,415 in cash inside of his vehicle.

After being slapped with 180 suspended sentence, the former Portland Trail Blazer likely turned on his phone to see hundreds of headlines and snarky tweets drawing attention to his jarring body transformation.

Perspective is a tough lesson to learn on the internet, but here goes.

In a 2017 ESPN profile when Swanigan was a first-team All American selection at Purdue, the power forward revealed that he’s struggled with weight issues all his life. He ballooned to 360 pounds the summer before eighth grade while floating between five different homeless shelters during his youth.

This is Caleb Swanigan (in the yellow shirt) in 8th grade, working out with his brother, Carl Jr. "Biggie" has changed his body and life. pic.twitter.com/636PYasQj4

“I’m a dessert person,” he told ESPN.com. “I’m not a potato chip [eater]. I can say no to those easy, but desserts are really my thing.”

“You think it’s something really small, but it just builds up,” he said. “One meal won’t kill you, but if it becomes three or four meals that are bad in a row, that’s when it starts to hurt your body.”

Caleb’s 6-foot-8 father weighed nearly 500 pounds when he died in 2014 at the age of 50 due to complications related to diabetes and drug use. Caleb was just 16.

Damian Lillard, Caleb’s former teammate, addressed the vulturous manner in which the Swanigan’s weight was covered on the internet in an Instagram comment.

"You don’t know WHAT it is he’s going through to cause a drastic change. If you gone be supportive then do that but don’t ask no shit like that like it’s not possible when you naturally a big dude and go down a dark road."

“If you’re gonna post this shit with real concern then that’s cool. But don’t ask “how does one go from this to that”, he’s clearly having some real life issues,” Lillard wrote.

When asked about Caleb in 2017, Purdue head coach Matt Painter added more perspective most of us willfully ignored this week.

“It really puts things in perspective, because all your players have problems, and I think he kind of looks at their problems like that’s not a problem compared to some of the things that he’s been through,” Painter said.

Caleb needs support, not shame. I’m asking too much of the internet aren’t I?