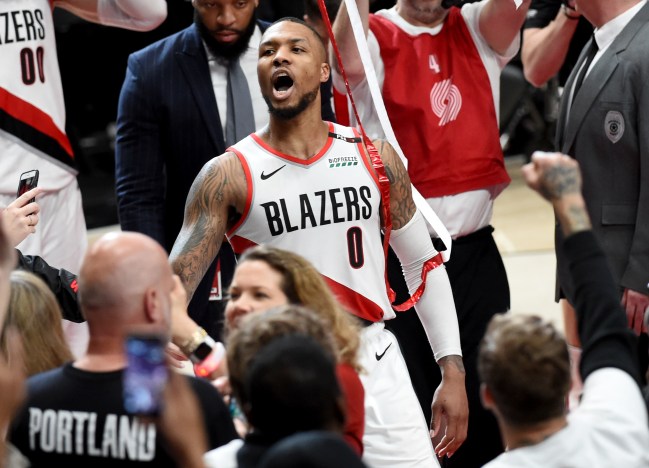 “Damian Lillard is a bad man.” That’s the text message I sent to a group of my buddies while watching the 4th quarter of Game 5 in the first-round series between the Portland Trail Blazers and Oklahoma City Thunder. “Playoff Dame” dropped 50 points on the Thunder, hitting a team playoff record 10 threes and leaving the entire city of Portland in a frenzy after his cold-blooded, 37-foot buzzer beater to bury the Thunder and move his team into the next round of the NBA Playoffs.

What Lillard did last night was nothing short of remarkable. The dude literally had everything working, showing that he was the best player in this series that had an abundance of All-Stars and solid players. And, while Damian Lillard’s game-winner may have seemed crazy to outsiders, inside his team’s locker room, it was something they all saw coming.

That’s because, according to a piece written by Chris Haynes of Yahoo! Sports, Dame put himself on a mission to eliminate the Thunder yesterday — and he made no bones about it on Monday night in front of his teammates while hosting some of them for dinner to watch some other playoff games.

Damian Lillard invited a few people to his home for dinner on Monday night to watch Game 4 of the first-round series between the Utah Jazz and Houston Rockets.

For several minutes, the Portland Trail Blazers’ star guard sat quietly on his sofa, chowing down on fried catfish, red beans and rice, and broccoli. And then suddenly, he spoke: “I’m getting rid of these motherf*ckers tomorrow.”

So why such hostility towards the Thunder? Unless you’ve been living under a rock, it’s because Damian Lillard has a personal rivalry with Russell Westbrook. And, after Lillard hit the game-winner last night, the All-Star point guard talked about some of that saltiness with Westbrook.

Much of the chatter during the series was about how Lillard was destroying the Thunder’s defensive scheme — and most notably, Westbrook. The two even engaged in a war of words on occasion.

It became personal for one of them.

“He was doing that on jump shots,” Lillard told Yahoo Sports. “That’s not when you’re supposed to rock the baby. You rock the baby after overpowering someone in the post. He had one layup in the post on me. Look it up. I’ll live with his jump shots. He wasn’t rocking no baby on me.”

Lillard showed a social-media clip of him telling Westbrook, “Stop running from this ass whoopin’,” as Lillard grew weary of Westbrook switching off him, while Lillard continued to be Westbrook’s primary defender.

And what came out of Westbrook’s mouth during a few of his post-basket outbursts was the B-word, something most players wouldn’t dismiss without an altercation.

“The way I see it, it’s basketball,” Lillard told Yahoo Sports. “I know I ain’t no b*tchass motherf*cker; so it doesn’t bother me.

“I’m not out here to prove to these dudes that I’m the hardest motherf*cker in the league because they cussed at me on the court. But they know where I’m from and what I’m about. This Oakland. But I don’t take s— personal. My goal is to get the win.”

Damian Lillard really is a bad man, and, now that he’s dispensed Russell Westbrook and the Oklahoma City Thunder, we’ll have to see if he keeps this going the rest of the NBA Playoffs and proves that he really is the “hardest motherf*cker in the league.” The guy makes things personal, so it wouldn’t be smart to doubt him.