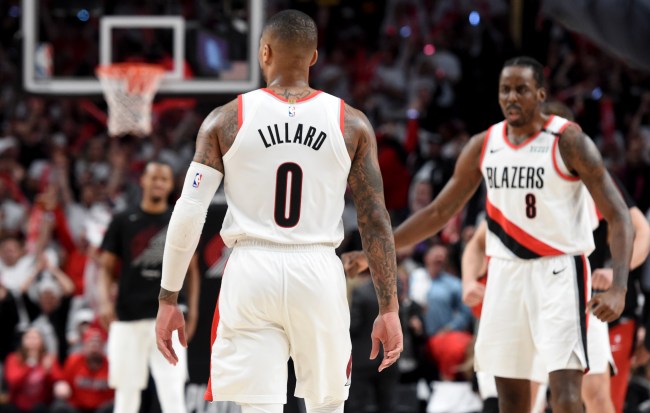 What Damian Lillard did to bury the Thunder last night can most aptly be compared to the restaurant scene in Dumb and Dumber when Lloyd Christmas bites the ballsack of the wait staff before ripping the head chef’s heart out and handing it to him in a doggy bag. Dame’s 37-foot dagger was cold-blooded and deserves a fine from the league’s front office.

Damian Lillard (50 PTS) buries the three for the #TissotBuzzerBeater and the @trailblazers advance to the Western Conference Semifinals with the 118-115 Game 5 victory! #ThisIsYourTime #RipCity#NBAPlayoffs pic.twitter.com/cVqLJkHLR4

The game-winner put an end to a tense series between two teams that evidently hate each other. Lillard, who isn’t boisterous by nature, sent the Thunder off with a sarcastic wave after ending their season.

After the game, Lillard discussed why the wave was warranted.

“The game, the series was over and that was it,” Lillard said. “And I was just waving goodbye to them. I think after Game 3, Dennis Schroder was out there pointing to his wrist, they was out there doing all these celebrations and doing all these stuff. We kept our composure and after one win that’s what they decided to do. And we was just like, ‘OK, what we want to do is win four games.’ And then when we win those four games there’s not going to be nothing to talk about. So that’s what that was.

The image of a cool, collected Dame celebrating while his teammates ecstatically mobbed him belongs in a museum.

this picture of damian lillard celebrating with his team looks like a renaissance painting pic.twitter.com/aElouM6Hqa

i was trying to figure out what Lillard's face reminded me of and I finally got it pic.twitter.com/MplfzQwYVL

Yup, that's me. Damian Lillard. You're probably wondering how I ended up in this situation… pic.twitter.com/CTxx5RqkXt

Oh yeah, Lillard also dropped 50 in the win. Maybe the most unjustly unheralded player in the league.