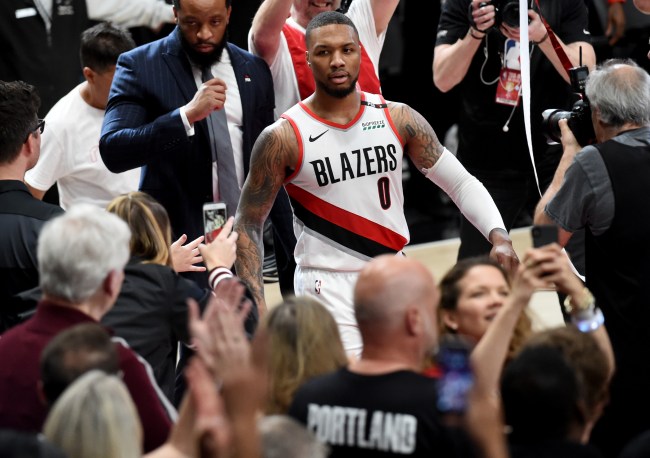 The NBA is currently considering several options to restart the season. Apparently one of the options that has been discussed by owners and players is to play a handful of games with all teams to reach 70 games to fulfill regional television deals.

The NBA and NBPA have discussed a model of 30 teams returning to reach a target goal of 72 regular-season games, sources said. This means the Hawks, who had 10 players participate in voluntary workouts on Memorial Day, are the league’s closest to that total with 67 games played this season.

Blazers guard Damian Lillard isn’t down to just play meaningless games if the team doesn’t have a legitimate chance to make the playoffs.

Lillard made his thoughts known when he spoke to Yahoo Sports’ NBA insider Chris Haynes.

“If we come back and they’re just like, ‘We’re adding a few games to finish the regular season,’ and they’re throwing us out there for meaningless games and we don’t have a true opportunity to get into the playoffs, I’m going to be with my team because I’m a part of the team. But I’m not going to be participating. I’m telling you that right now. And you can put that [expletive] in there,” Lillard told Yahoo Sports on Tuesday morning via phone.

If we come back and I don’t have an opportunity to make the playoffs, I will show up to work, I’ll be at practice and I’ll be with my team. I’m going to do all that [expletive] and then I’m going to be sitting right on that bench during the games,” Lillard told Yahoo Sports. “If they come back and say it’s something like a tournament, play-in style, between the No. 7 and No. 12 seeds, if we’re playing for playoff spots, then I think that’s perfect.

According to The Athletic’s other options owners and players are discussing include a play-in tournament, a full tournament between all 30 teams, or just heading straight into the playoffs with the top 16 teams.

NBA surveyed GMs on several formats to restart the season:
– 16 teams directly to playoffs
– “Playoffs Plus” (play-in or group stage)
– All 30 teams — or all 30 teams with play-in tournament

The players are currently discussing between themselves what the best option is to move forward.

The NBPA’s Michele Roberts is conducting team-by-team conference calls with players, detailing talks with NBA on formats for resumption of play in Orlando, financial implications of those options and gathering feedback, sources tell ESPN.

Update: Lakers’ Jared Dudley responded to Lillard’s quote and said it’s something that is being discussed behind closed doors.

Trust me NBA already thought of this.. hence the play in tournament.. League wants to add fan bases and excitement to the start up… esp Between Dame and Zion.. Guess will see https://t.co/FQJhsIEHWV