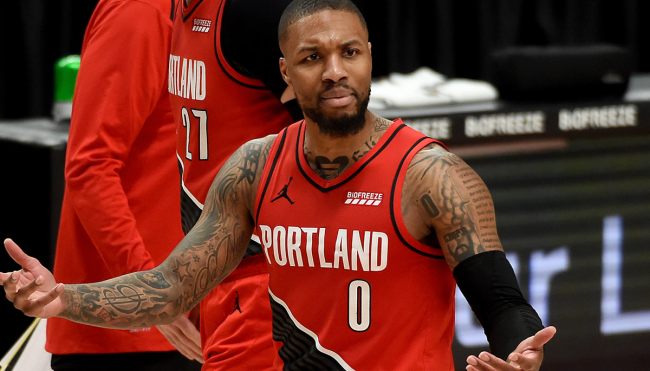 A lot of gamblers like to throw out the phrase “bet the house” to describe particularly sizeable wagers, but you don’t have to be a financial guru to know that actually putting your home on the line is a pretty good sign you should call a hotline dedicated to helping people with problematic gambling habits.

Last month, one guy who appeared to fit that bill hopped into the mentions of Damian Lillard to check on the status of his hamstring, claiming he needed the Portland Trail Blazers to win 42 games by the time his year’s NBA season wrapped up to avoid living on the streets.

Dame how is your hamstring? I need you guys to win 42 games this year or I lose my house. Huge fan even if I’m in the mansion or homeless 🤝

Lillard missed out on the opportunity to provide the fan with a phone number after responding to that thinly veiled call for help, but he did give him a pretty valuable piece of life advice after coming across the tweet.

It looked like the bettor got to breathe a sigh of relief on Sunday when the Trail Blazers beat the Nuggets to notch their 42nd win of the year, and after the victory, the guard hopped back on Twitter to ask the dude to pull out the receipts.

It took less than two hours for the guy to reply, but for some reason, he failed to take the extra time to Photoshop the betting slip he posted that either revealed he’s a fraud or someone who somehow managed to purchase a mansion for $260.

I have to give him credit for responding to Lillard instead of ghosting him and leaving the internet hanging in the process. However, when you consider he had a month to prepare for this moment, it’s hard to believe he wasn’t able to figure out a way to avoid blowing his own spot up.