Damian Lillard Could Be Available, And Stephen A. Smith Says More Than A Handful Of Teams Think They Could Get Him 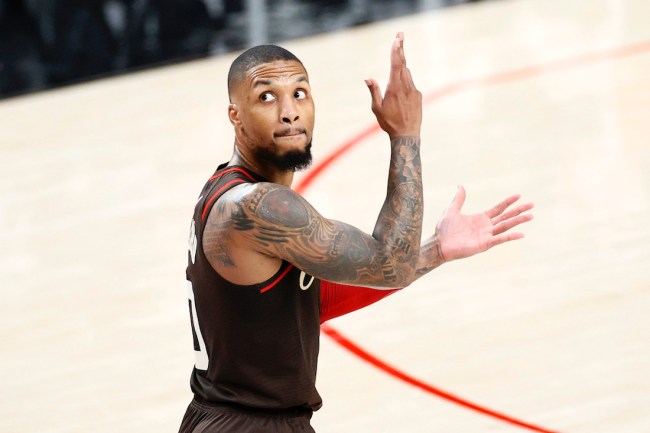 Look at these stats that Damian Lillard put up against the Denver Nuggets in the first round of the NBA Playoffs and ask yourself if he’s the problem for the Portland Trail Blazers.

Those are unworldly stats, and they don’t even include that clutch gene that Dame (once again) proved he had by hitting a couple buzzer beaters against the Nuggets. As Lillard goes, so, too, go the Blazers.

Unfortunately, the All-Star point guard and his Portland teammates find themselves watching the rest of the postseason from their couches, with the Nuggets sending them packing after six games. It was another disappointing end of the season for Lillard’s bunch, and led the star to reveal his frustrations after the loss on Thursday night. It included an Instagram post that caused a stir amongst the NBA community.

Damian Lillard on if the Blazers need changes this offseason: "Obviously where we are isn't good enough to win a championship if it's not good enough to get out of a first round series with two of their best three or four players not on the floor." pic.twitter.com/gbXkqDko0s

Damian Lillard could’ve very easily just been quoting a friend of his, since departed Nipsey Hussle, but it seems a little more than that. The cryptic nature of the post coming immediately after his Portland Trail Blazers got bounced in the NBA Playoffs makes it seem like he’s questioning whether or not he’s with the right franchise to legitimately contend for a championship. Combine that with his quote to the media about possible changes with the organization and it makes you wonder if he’s already thinking about his own future with the team.

Then there’s this: Given the nature and tone of the messages from Lillard after the loss to the Nuggets, Stephen A. Smith said on Get Up Friday morning that he’s already heard that six to seven teams believe they have a real shot at trading for the star. Here’s what the plugged in analyst had to say about what he’s heard from a source.

Sure, this could all just be the typical knee-jerk reaction from the media following the events that transpired in the NBA Playoffs, but it just seems different. It really seems like Lillard might feel like he’s done everything he could and hasn’t seen the results he wants. It’s why Stephen A. Smith mentions teams like the New York Knicks, Miami Heat, and both Los Angeles franchises; the Lakers and Clippers.

While Damian Lillard has never demanded a trade from the Blazers at any point during his time there, after another heartbreaking defeat in the playoffs, it sounds as if he’s thinking about what might come next in his career. With other teams proving to be better — and teams like the Warriors and Grizzlies showing they’re on the rise — it might be time for a fresh start for the superstar.

This NBA offseason is expected to be another wild ride. Could Dame be shipped out of town for a Blazers rebuild, do they make some changes and try to build a stronger core around the point guard, or do they run it back and risk even more frustration again next season? It’s an interesting storyline to keep a close eye on over the next few months.