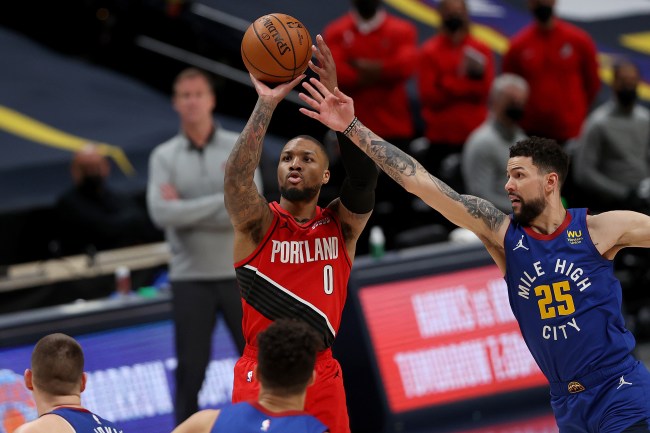 That is a legitimate stat-line produced by Damian Lillard in the most exhilarating game in the playoffs thus far. The Denver Nuggets narrowly outlasted Portland 147-140 in double-overtime, but Dame’s performance may be on the Mount Rushmore of All-Time Performances In A Loss. Lillard is the first player in NBA history with 50 Pts, 10 Ast and 10 3-pointers in a game, regular season or playoffs.

Damian Lillard's shot chart tonight should be inducted into the Hall of Fame, good god. pic.twitter.com/aAxWzCjo5X

Kevin Durant, whose Nets polished off the Celtics last night, dubbed Lillard’s performance a “masterpiece” before admitting he was “at a loss for words.” He went on to categorize it as a “spiritual experience.”

During one of just five of misses on 17 attempts from deep, Nuggets guard Austin Rivers literally thanked a higher power during action for gifting him with a rare Dame misfire.

Rivers praised Lillard after the game, claiming the six-time NBA All-Star is “as tough as they come.”

Austin Rivers with nothing but respect for Damian Lillard’s performance.

“Bro … he was not missing for sh*t. 1 [hand] in his face, 2 hands in his face. Lol I’m like wtf is this. Banking threes and sh*t. In all seriousness it’s really fun to guard him. He’s as tough as they come. No lie.”

.@Dame_Lillard that’s all I have to says

Someone gotta put this Dame Dolla performance in The Lourve!

This is a masterpiece!