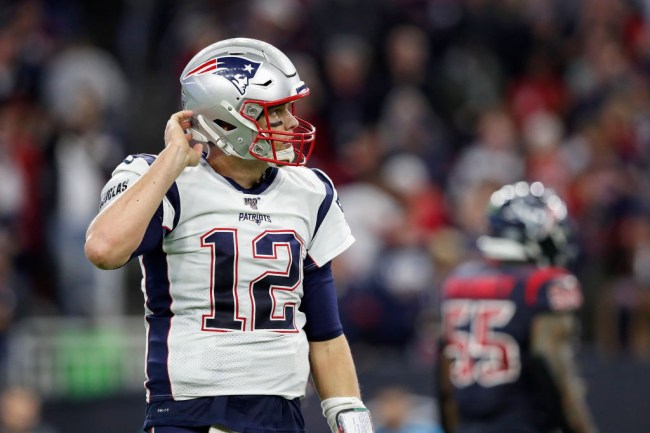 Nobody, maybe not even Tom Brady himself at this point in time, knows what next year is going to look like for No. 12. The 42-year-old will be a free-agent at the end of the season and whether or not New England signs him to a new deal, he takes his talents elsewhere or hangs up the cleats to go hang with his supermodel wife and kids, nobody knows.

Damien Woody, who spent five seasons with the Patriots, seems to have an idea though. The former offensive lineman joined ESPN’s ‘Get Up’ on Thursday and claimed that we’re witnessing the end of an era and Brady’s time in a Patriots uniform is coming to an end.

He even believes that the TB12 story in New England could end on Saturday when Ryan Tannehill and the Titans visit Foxborough.

“I think we’re looking at the end. I think this is going to be the end of Tom Brady in a Patriots uniform.

This hasn’t been the typical Patriots run heading into the playoffs. Usually around Thanksgiving, they’ve figured it out, got their identity, they’re hot going into the playoffs. I mean, they’re coming off a loss at home, a must-win game to get the second seed to the Miami Dolphins, where Tom Brady didn’t look well at all. The Patriots have a very thin margin for error. If their defense isn’t on top of its game, they’re gonna lose. They’re going against a Tennessee Titans team that’s humming.”

There’s no denying that the Pats’ effort against the Dolphins was, let’s say, unusual last week when they needed the win, but we haven’t seen the same consistent Brady we’ve grown so accustomed to seeing over the last decade-plus this season.

His numbers aren’t necessarily bad with 24 touchdowns, eight picks and a completion percentage of over 60 percent, but he hasn’t looked like himself in many situations. At the end of the day, Father Time is undefeated and it’s been clear that he’s catching up to Brady and his arm.

Whether or not Saturday is the last time we ever see Brady wear a New England jersey or not, it’s been one hell of a ride watching Brady over the years.

Especially for a Giants fan, specifically on two particular days in February in 2008 and 2012, but we don’t have to talk about all that.