Dan Campbell Calling Out Jared Goff Was Extremely Uncomfortable, But It’s Not Entirely His Fault 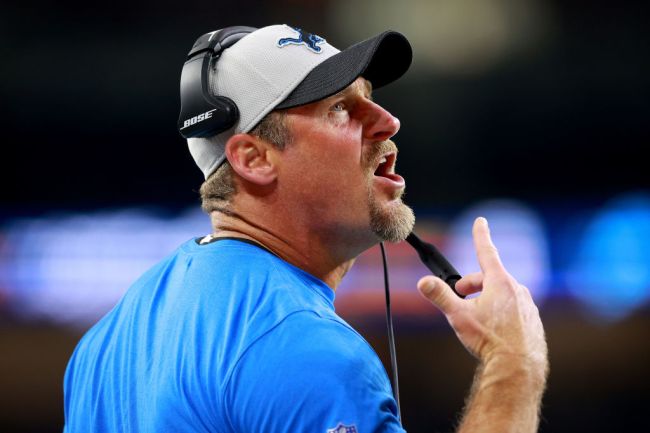 Stop me if you’ve heard this one before— the Detroit Lions are the worst team in the NFL and their quarterback is coming under fire. It’s a tale as old as time.

However, this year, it’s different.

The criticism toward the team’s signal-caller is coming from his head coach. Dan Campbell spoke with the media after Sunday’s home loss to the Bengals and did not have positive things to say about Jared Goff. It was awkward.

Goff, who was traded from Los Angeles during the offseason, went 28-of-42 for 202 yards and no touchdowns with an interception in the loss.

When Campbell was asked about his performance, the first-year head coach struggled to find words. He stumbled around an answer, saying that “we can’t accurately judge him one way or another” and that he doesn’t feel like there needs to be a change at the position “yet.”

Campbell then went on to call out his quarterback.

“I will say this,” he said before a very long, uncomfortable pause. “I feel like he needs to step up more than he has.”

Listen to the full answer:

"I feel like he needs to step up more than he has."

The entire exchange was awkward and Campbell, who couldn’t stop fidgeting with a piece of paper, was clearly ill at ease.

Although he should not have been critical of his quarterback in a public manner like he was, the blame is not entirely on Campbell. His PR team failed him miserably.

There is a reason that we do not see quarterback criticism in press conferences these days. Those matters are kept behind closed doors and Campbell’s inexperience was a detriment to him in this instance.

But with that being said, he should not have been left to answer on his own. The Lions’ PR team should have handed him a notecard with a script on what to say in certain situations.

If a question came up about the quarterback play, which was almost certain to be asked, Campbell should have had an answer written out for him on the notecard. Instead, he was left to fend for himself and made things incredibly, incredibly uncomfortable.

It just goes to show— even beyond the on-field play, the Lions are a mess. All of the way down to the PR team.