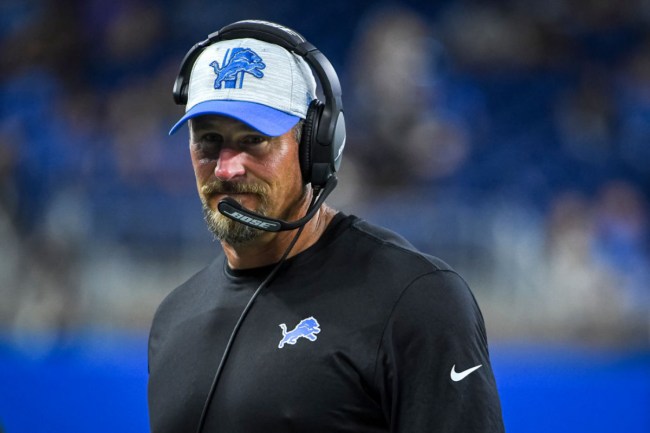 Dan Campbell is trying to build a winning culture in Detroit, so when one of the Lions’ assistant coaches was rumored to be leaving, Campbell became fearful.

Defensive coordinator Aaron Glenn arrived in the Motor City with Campbell ahead of the 2021 season. Despite the Lions giving up the fourth-most yards per game a season ago, Glenn interviewed for the vacant head coaching job with the New Orleans Saints earlier this offseason.

Glenn spent a handful of seasons in New Orleans before making the move to Detroit, but Campbell didn’t want to see his defensive coordinator go.

Speaking with the media on Thursday, Campbell was asked what was going through his mind when Glenn was mentioned as a candidate for the job in New Orleans.

Campbell offered up the latest of his long line of great quotes.

“The thought of losing him was like I was gonna be walking around without any pants on,” Campbell joked.

Lions HC Dan Campbell on what was going through his mind when DC Aaron Glenn was a top candidate for the Saints head coaching gig:

“I was happy as hell for him…but the thought of losing him was like I was gonna be walking around without any pants on.” 😂 pic.twitter.com/zspY2vI3na

Campbell has shown he has a way with words since landing the head coaching gig in Detroit.

We can’t forget about his opening press conference after being hired when he said the Lions were going to bite their opponent’s kneecaps off.

The Lions didn’t do much biting in Campbell’s first season a year ago winning just three games and tying another, but he hopes Glenn returning to his staff will help turn things in the right direction.