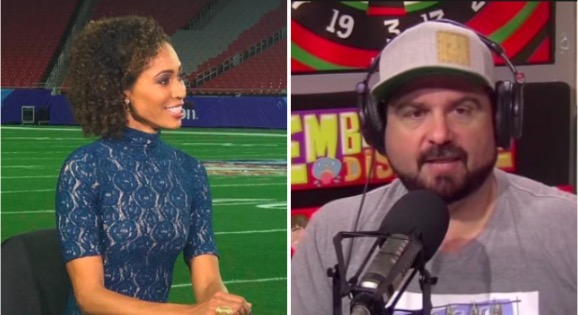 ESPN’s Sage Steele is currently in the trenches right now dodging grenades after the comments she made today taking aim at the thousands of people protesting at airports across America in response to President Trump’s travel ban. Many believe her gripe with missing her flight because of the protests at Los Angeles International Airport were self-centered and tone deaf.

Comments included, but certainly were not limited to, the ones below.

"Ma'am we don't have time for this, some of us are trying to get home" – sage steele to Rosa parks

" Can you guys move out the way? I got a 3pm appointment."
Sage Steele to the Civil Rights Movement at Selma

Sage’s ESPN colleague Dan Le Batard, the son of immigrants, took exception to Sage’s comments on his show this morning, but not before shredding ESPN for actively taking measures not to call attention to the ban. Le Betard alluded to ESPN trying to dance around the issue by covering it vaguely under the guise of sports, using Steve Kerr recently saying the immigration ban “goes against principles of our country.”

“Now part of the thing we negotiated when we started on this show, more than money, more than anything was freedom of content and I get what ESPN is afraid of here. They don’t want you talking about things in a way that calls the president an idiot who thinks that he’s smart. That’s the most dangerous kind of idiot, an idiot who doesn’t know he’s an idiot…”

“The genie is out of the bottle on this because we all have our own Twitter accounts and all have our own social media,” he said. “This is what ESPN is trying to prevent because once one person does it, it opens the floodgates for the rest of us because of course, I, as the son of exiles, look at this and I’m like what the hell are you talking about [that] your travel plans were affected? What are you talking about? The height of privilege…

The Worldwide Leader In Sports has recently seen an exodus from its network–Bill Simmons, Colin Cowherd, Keith Olbermann, Jason Whitlock, Mike Tirico, Skip Bayless, Curt Schilling, Cris Carter and Ray Lewis, all bailed in under 12 months–and it appears the talent they have left has some gripes of their own.