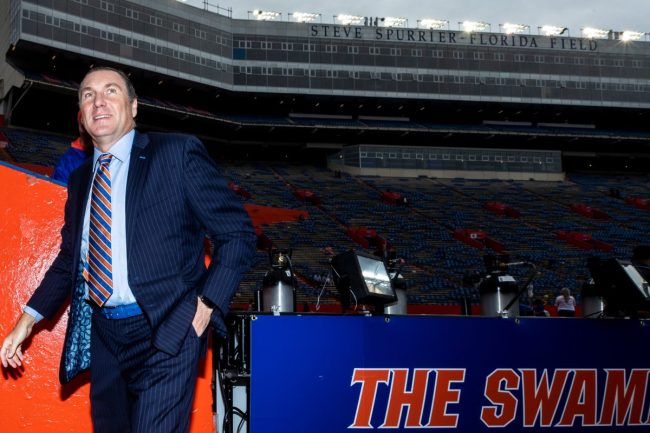 Dan Mullen is not the most loved person by Gator Nation following his short tenure in Gainesville. The head coach led the Florida program between 2018 and 2021.

After winning 21 games and making an SEC Championship appearance over his first two seasons, the Gators fell off under Mullen’s reign. In his final two campaigns, Florida went 13-10 leading to his firing before the end of 2021.

The head coach was not only losing on the field, but he seemed almost uninterested in doing key parts of his job. Mullen didn’t appear to like recruiting, and he was constantly being tied to potential NFL openings with many believing he’d jump ship at the first professional opportunity.

He never got that chance, and the Gators have since moved on to Billy Napier. Florida got off to a great start in the 2022 season, taking down potential College Football Playoff contender Utah in The Swamp.

But while Florida fans were riding high after Week 1, Mullen found a way to bring them back down to Earth.

Mullen picked the Gators to finish fourth in the SEC East earlier this offseason, which didn’t sit well with many Florida fans. Now, he’s taken things a step further with his “Way-Too-Early” National Championship winner.

Now, the Bulldogs looked great in a 49-3 blowout of No. 11 Oregon, and maybe he truly believes that they’re the best team in the nation. But it seems Mullen is taking an opportunity to troll the Gators. At least that’s what many college football fans are saying.

Take a look at the initial social media response.

One fan says, “If this isn’t throwing shade at UF, I dunno what is.”

If this isn't throwing shade at UF, I dunno what is. https://t.co/VN9T0YEVjx

Another posted, “Nah this deffly giving hater energy. Ain’t no way you can tell me he’s not tryna throw shade at UF lol.”

Nah this deffly giving hater energy. Ain’t no way you can tell me he’s not tryna throw shade at UF lol. https://t.co/4JjXPqrCzM

This poster though something was fishy, saying, “Is Dan trolling? I can’t tell.”

Yes, Georgia had a great win to open the season, but very few are posting their new national championship picks after Week 1. One thing is for sure, Mullen accomplished his task if he was trying to get Gator fans riled up.