Dan Orlovsky Channels ‘Braveheart’, Screams ‘FREEDOM!’ As Jimmy Garoppolo Overtakes Him As Latest Example Of QB Running Out Of Their Endzone 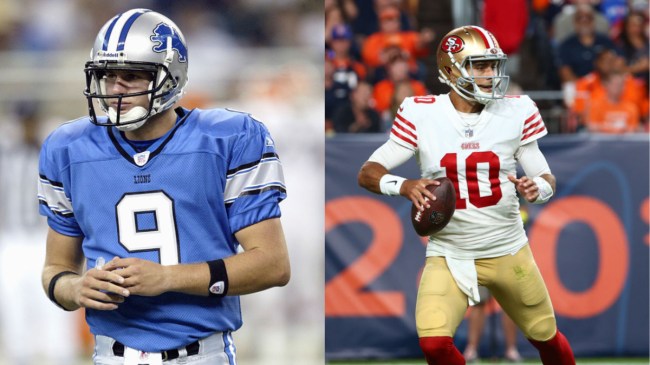 During the (incredibly painful to watch — let Russ cook?) Sunday Night Football game between the San Francisco 49ers, newly installed Niners starting QB Jimmy Garoppolo ran out of the back of the team’s own end zone, which results in a safety.

As Mike Tirico pointed out in the moment, the first thing NFL fans think of when a quarterback runs out of their endzone is former Detroit Lions QB Dan Orlovsky, who now works over at ESPN as one of the network’s most prominent NFL analysts. Orlovsky, of course, became synonymous with the embarrassing play back in 2008 as a member of the infamous winless 0-16 Detroit Lions.

While most fans were joking about Tirico reminding the country of Orlovsky’s blunder, Dan himself actually had a much different reaction as he hopped on Twitter to claim he’s “never been happier” before channeling his inner William Wallace.

Despite the continued struggles of quarterback Russell Wilson as he embarks on his career with the Broncos, Denver was narrowly able to defeat Jimmy G and the Niners by a score of 11-10, which is either particularly excellent or brutal depending on who you bet on as the spread was 1.5 points.

Wilson, who signed a five-year, $245 million contract upon his arrival in Mile High City completed 20 of 33 passes for 184 yards, no touchdowns, and no interceptions in the game. As for Garoppolo, he completed 18 of 29 attempts for 211 yards, one TD, and one interception.