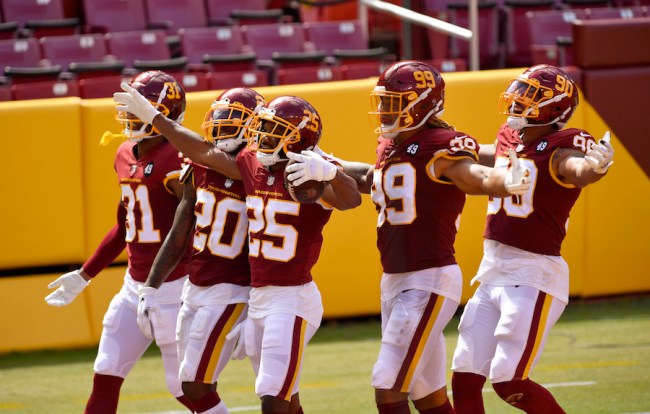 In the first half of the game against the Philadelphia Eagles on Sunday, the Washington Football Team looked absolutely lost. Carson Wentz came out firing and the Eagles took a quick 17-0 lead.

The team went into the locker room, and while head coach Ron Rivera was getting a planned IV to treat his cancer, Dwayne Haskins delivered the halftime speech.

To start the second half, the Eagles offensive line forgot to come out of the locker room and Carson Wentz went colorblind. Eight sacks and two interceptions later and the Washington Football Team scored 24 unanswered points and walked away with a 24-17 win over a division rival.

The Washington Football Team is now 1-0 and feeling pretty good. So good that owner Dan Synder might keep the team’s temporary name.

At least that’s what he told Andrew Beaton of the Wall Street Journal in an email.

“Sure, it’s possible!” Snyder wrote in an email to Beaton. “If the Washington Football Team name catches on and our fans embrace it then we would be happy to have it as our permanent name. I think we have developed a very classy retro look and feel.”

Snyder didn’t say if the organization is any closer to a decision but did tell Beaton “he’s going to take as much time as it takes to get the name right, and choose a name that generations of fans will support.”

Wrote Snyder:  “We want our future name and brand to stand for something that unifies people of all backgrounds and to continue to be a source of pride for the next 100 years or more.”