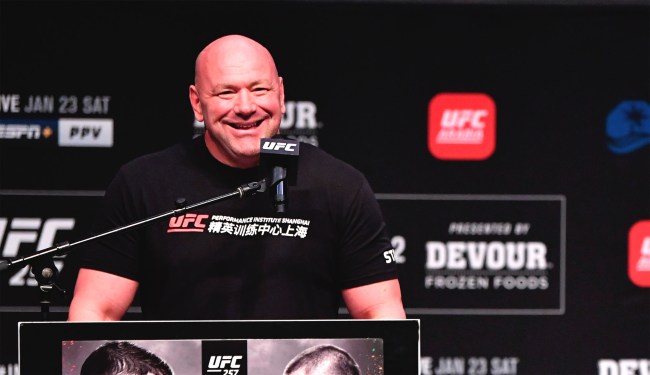 In the lead up to Saturday night’s UFC 257 pay-per-view, UFC president Dana White revealed that, as he had previously pledged, he had a “a surprise” for anyone he catches illegally streaming the event, and especially for one pay-per-view pirate in particular.

“We got one,” White said at the pre-UFC 257 press conference. “We got him. We’re watching this guy right now. All you have to do is turn it on Saturday, and we got you, f–ker. I can’t wait. Turn it on Saturday, streamers, and see what happens.”

In a separate interview with BT Sport, White added, “We’re watching his house, we’re listening to his phone conversations, and if he puts it up on Saturday, we got him.

“He pops this link up on Saturday, we got him, and we will arrest him, and I will prosecute him. I will not be nice. I will not give him any leniency whatsoever. I will go guns-a-f–king-blazing on this guy.”

Following the first UFC pay-per-view of 2021, White revealed, “So let me tell you that story. The night, that I guess it was I did an interview with BT and then I think you asked me as the press conference, right? And, you know, I basically said this is what’s going to happen. I told you guys that we found the guy and we were watching him.

“He put out a statement that night, said ‘I will not be streaming the McGregor vs. Poirier anymore, but I will show you how to buy it legally’ and put out this huge statement. And now his whole streaming service has been deleted and is gone. Disappeared. One down and a sh-tload to go. And I’m ready.”

White added that this is just the beginning of his fight against UFC PPV pirates.

“Every event I’m gonna go after one of these guys.” White announced. “One of these or more, we’ll see.

“And who you are, guy that did this, good move, we had you, pal. I don’t know if he knew something or what, but we had you. All you had to do was pop up that stream and you were in big trouble. So, he did the right thing.”