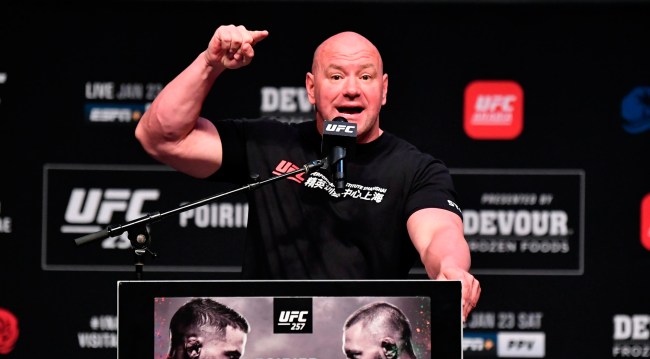 UFC 257 is setting up to be a very entertaining fight card. The return of Conor McGregor to the octagon for his first fight since January of 2020 alone is enough to make MMA fans excited.

Turns out that the entertainment Saturday night might not be limited to the fights inside the octagon. There is also the possibility of some fireworks behind the scenes as well.

Related: Just Who Is Dustin Poirier, The Man Fighting Conor McGregor At UFC 257?

UFC President Dana White, who has been promising “a surprise” for anyone he catches illegally streaming UFC 257, pledged to make good on that promise during the UFC 257 Press Conference, claiming he has eyes on one pay-per-view pirate in particular.

White later explained further what he meant, telling BT Sport, “When I came out and said this all these guys started taunting me. So I went through, and I picked. I said, ‘You. You. You’re the guy.’ And I told my people, ‘I want this guy.’ And guess what? We got him. We’re watching his house, we’re listening to his phone conversations, and if he puts it up on Saturday, we got him.

“He pops this link up on Saturday, we got him, and we will arrest him, and I will prosecute him. I will not be nice. I will not give him any leniency whatsoever. I will go guns-a-f–king-blazing on this guy.”

Wait… Dana is listening to his phone conversations?

“These guys think they’re so smart, they think they’re untouchable, they think it’s impossible,” White continued. “When you have a company as big – if the NFL wanted to catch people for doing it, they can catch you. You can be caught. The guy just has to be as sick as me and want to get you. This guy puts this link up on Saturday night, he’s mine.

“Listen, I’ve got this built in mechanism. I don’t know what it is with me but if you want to fight with me, we can fight. And I like to fight and I like to win. I’m the wrong dude to play this game with.”