How Did Conor McGregor Get in His ‘Greatest’ Shape Ever for UFC 257? 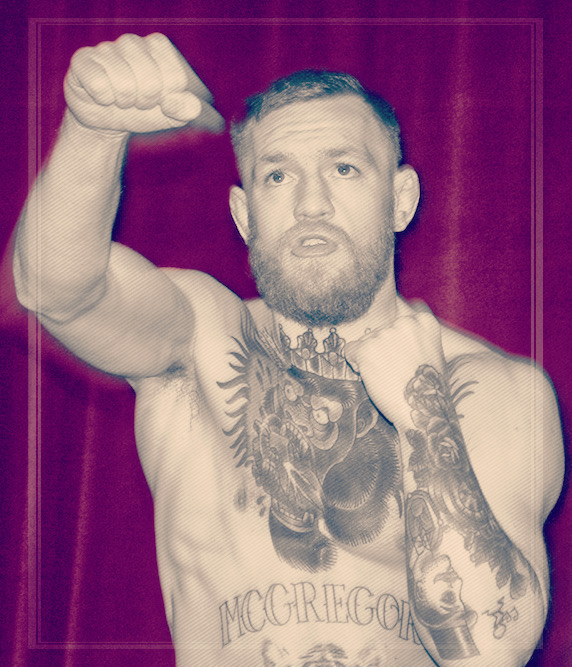 Wanna look and fight like “The Notorious” Conor McGregor? In addition to super human genetics, it’ll take a lifetime of training and dedication, not to mention millions of dollars.

With yet another big comeback (after yet another brief retirement) on tap for Saturday, January 23 (7 p.m. PST / 10 p.m. EST ESPN+ PPV) Conor McGregor, who faces Dustin Poirier in the UFC 257 main event, has just completed what he described to ESPN as “the greatest camp, the greatest weight transition, [he’s] ever endured.”

We’ll only know on fight night if the marathon camp and designer nutrition regimen is everything McGregor is making it out to be. However, looking at the details of his preparation for UFC 257, not to mention some choice social media posts, it’s apparent that “The Notorious” has really outdone himself this time.

Due to major COVID-related restrictions and lockdowns in his native Ireland, which started on October 21 and ran through December 1, McGregor exported an entourage of coaches, training partners, and a nutritionist from Dublin to Lagos, Portugal, a beach town in the Algarve.

An idyllic and exotic location, Lagos was chosen by McGregor for a very specific reason, and it’s not the breathtaking ocean views. Rather, the team retreated to the Algarve to hole up at the Shinobi MMA Academy, home base for former pro cyclist Colin Byrne and Dr. Julian Dalby, co-creators of the McGregor Fast training system.

First linking up with McGregor in 2016 ahead of his rematch against Nate Diaz at UFC 202, Byrne and Dalby have worked closely with “The Notorious” for every fight since, developing the McGregor Fast along with Conor. It’s a program that has led to some great results over the last four years, and in order to make a successful return to the lightweight division, McGregor went big to get small for his UFC 257 fight camp.

Performing skill sessions in specific martial arts disciplines in the morning, McGregor underwent cardio and strength training in the evening, along with active recovery routines like yoga and rock climbing mixed in to help “The Notorious” avoid overtraining, which, according to Byrne (as told to ESPN’s Marc Raimondi), had been a major problem prior to UFC 202.

Dropping down to lightweight for the first time in more than two years (his last bout against Donald Cerrone at UFC 246 was contested at 170 pounds), McGregor enlisted nutritionist Tristan Kennedy to micromanage all of his caloric intake.

The whole thing has been really scientific, honestly.

Sequestered in a $13,700/week mansion in Lagos, McGregor also brought a stable of training partners to Portugal to help him train for UFC 257. And, while mainstays like Artem Lobov and Dillon Danis were unable to join “The Notorious” in the Algarve to prepare for Poirier, lesser known specialists like 11-time Irish national boxing champion William Hayden, Moldovan wrestler Kosti Gnusariov, and Brazilian Jiu Jitsu standout Lee Hammond all made the trek, as did 15-1 boxing professional Dylan Moran, who sparred with McGregor.

Unlike the majority of pro MMA fighters, who train at big gyms with other pros and work in camps collectively, McGregor created a fight camp and training regimen customized to his specific needs. And, following the conclusion of his training at Byrne’s Shinobi MMA Academy, McGregor brought the whole team back to Ireland, just in time for Christmas. But even then, the training didn’t stop.

Back in Dublin for two weeks over the holidays, McGregor didn’t slack on his training. Instead, according to Petesy Carroll of The Bash podcast, he had a full-sized Octagon and training facility built on his property (gyms have been closed during Ireland’s COVID lockdowns) so that he could continue his camp for UFC 257.

And, while Conor did have a lovely holiday with the family, he remained focused on Poirier and the slow, gradual, and consistent cut down to 155 pounds.

Bumping down to single daily training sessions on January 13, when he was already in Dubai, his last stop before heading to Fight Island in Abu Dhabi, McGregor has now completed his training camp for UFC 257.

Judging by his physique and demeanor, “The Notorious” is completely dialed in for his rematch against Poirier on Saturday, January 23. And, given the details of his epic fight camp, it’s clear that McGregor intends to put on a dazzling display, perhaps like nothing we’ve ever seen before. It’s not out of the realm of possibility, especially considering that McGregor seems to up the ante every time out.

So who knows, UFC 257 may just be Conor’s greatest masterpiece yet. Only one way to find out.