Who Is Going To Win? – An Analysis Of The UFC 257: Poirier vs. McGregor 2 Main Event 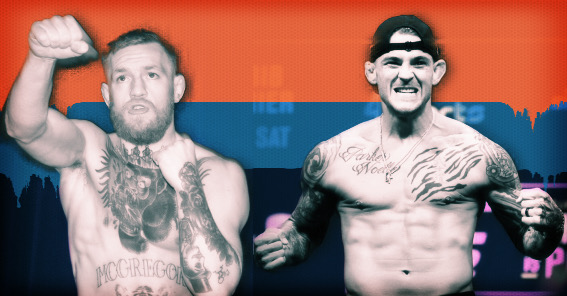 Presented in partnership with UFC 257 on ESPN+
Here we are, just a few days out from UFC 257 fight night.

With only a handful of sleeps remaining until “The Notorious” Conor McGregor takes on Dustin “The Diamond” Poirier in the UFC 257 PPV main event on ESPN+ (Saturday, January 23, 7 p.m. PST / 10 p.m. EST), there’s no better time to dive in and break things down.

So, here are all the details and style points you’ll need to know ahead of the UFC 257 PPV.

Take a look, have a read, and give it a gander because McGregor vs. Poirier 2 is about to be everything a fight fan can imagine from two of the best boxers, and fighters, in mixed martial arts.

It’s impossible to analyze the UFC 257 McGregor vs. Poirier main event without acknowledging that this fight on January 23 is, in fact, a rematch of a bout from September 2014.

Over six years ago, McGregor and Poirier stepped into the Octagon at the MGM Grand Garden Arena for a highly contentious grudge match. On that night, at UFC 178, McGregor needed just 1:46 to knock Poirier out. McGregor called his shot, predicting the first round KO; however, it will be a much different story at UFC 257, despite Conor already going on the record to state that he’ll need less than a minute to finish Poirier on Fight Island.

A major change from the first fight, which took place at featherweight (145 lbs.), is that McGregor vs. Poirier 2 will be contested at lightweight (155 lbs.). It’s a huge difference to be honest. Those ten pounds will play massively when McGregor and Poirier start throwing, and landing, heavy punches.

The change in weight will also have a serious impact on both fighters’ ability to absorb punches.

Moving up to 155 pounds following his loss to McGregor, Poirier has evolved into a completely different fighter during the last six years. No longer hampered by drastic and constant weight cutting (the process by which fighters lose massive amounts of water weight in order to make the contracted weight for the bout), Poirier has added strength and size to his frame, tactfully taking his time to fill his body out to be competitive with the best lightweights in the world.

He’s collected eight fight night bonuses at lightweight and has become one of the UFC’s most decorated and consistent performers of the last decade.

Where Poirier shines best is on the feet, and in particular with his fists, where his boxing has become some of the best to ever grace the Octagon. Poirier combines power, speed, accuracy, and volume to create a impeccable boxing attack that has finished many top lightweights; however, it’s still unclear if all these improvements will be enough for the southpaw from Lafayette, Louisiana to earn his redemption over McGregor, but stylistically, Poirier will most certainly bring the fight and keep the contest in close quarters.

Poirier has exceptional power in the pocket, and most pundits would agree that his best chance at UFC 257 is to get in close and make it a dog fight with McGregor. “The Diamond” is known for his immense heart and determination, so if he can make it a bloody and dirty affair, he has the ability to grind and grit out a win. Although, what are the chances that McGregor actually obliges this gameplan?

Also, while Poirier has developed into a drastically different fighter in the last six years, what are the chances that he’ll be able to erase the sting of succumbing to McGregor’s punches at UFC 178? Can one’s brain ever really intentionally forget such trauma? Especially when McGregor will have another 10 pounds of muscle behind his punches at UFC 257.

McGregor on Poirier: "I see him reacting a lot, I see him hesitant, I see him in a rush, in a panic, pretty much the same way I saw him the last time. That's going to be in his head for sure."

Speaking with Aaron Bronsteter of TSN, McGregor noted that “I see [Poirier] reacting a lot. I see him hesitant. I see him in a rush, in a panic, pretty much the same way I saw him the last time. That’s going to be in his head for sure.”

Those same thoughts were echoed by John Kavanagh, McGregor’s head coach and cornerman, who told The Mac Life “I think you can spend a lifetime going to sports psychologists and talking to this person and that person, that’s not going to have been erased from his mind … [Poirier] knows he’s facing somebody that can shut off his lights very, very rapidly and is now a lot more powerful and experienced than he was then. So it’s a tough uphill battle for Dustin … there’s nothing to be said when you’ve really badly hurt someone that fast.”

With McGregor and his team certain that the outcome from the first fight against Poirier will have some impact, at the very least psychologically, on Saturday at UFC 257, it’s also important to note the improvements that “The Notorious” has made since their first fight.

Like Poirier, McGregor also made the move up to lightweight, albeit for entirely different reasons.

After claiming the unified featherweight title in December 2015 and smashing UFC PPV records for his pair of fights against Nate Diaz (contested at welterweight), McGregor made his lightweight debut in November 2016, easily capturing the lightweight title at UFC 205.

So impressive and dominant was McGregor in his first foray at lightweight that it quickly became common belief that 155 pounds was his ideal weight class. The jury is still out on that one, but mostly because the sample size is so small.

At lightweight, McGregor still has the size, strength, and power to compete with everyone in the division; however, he also remains one of the quickest fighters at 155 pounds, not to mention one of the most accurate. He’s also become a clever and creative martial artist, evidenced by his improvisational use of shoulder strikes during his last bout, a 40 second drubbing of Donald “Cowboy” Cerrone at UFC 246.

To his credit, McGregor has improved greatly in all facets of mixed martial arts. He’s worked tirelessly with wrestling coach Sergey Pikulskiy to improve his grappling and ground game, while making major improvements in his cardio thanks to his McGregor Fast training program. He’s also improved in the striking department, his forte, making major strides in his boxing since the historic Mayweather vs. McGregor fight.

“It has been the greatest camp, the greatest weight transition I’ve ever endured,” explained McGregor, while speaking with Ariel Helwani of ESPN. “I’m embracing it. I’m a true lightweight frame now … I’m zippy. I’m fast. I’m powerful … I’ve gone up in strength and power.”

With both McGregor and Poirier making major improvements to their MMA arsenals during the six years since their first encounter, it’s tough exactly to predict how the UFC 257 PPV main event on ESPN+ will go.

Logically, the bout is most likely to play out on the feet. However, both Poirier and McGregor employ their standup skills in a very different way.

While Poirier threatens with low leg kicks to pressure his way into boxing range, McGregor prefers spinning hook kicks up high to keep a bit more distance, which will work in his favor given his 2-inch reach advantage over “The Diamond.”

And, whereas Poirier prefers dirty boxing in the pocket — fighting in a phonebooth as they like to say colloquially — McGregor likes to line up and pick his punches after finding his range with the kicks.

Stylistically, this Poirier vs. McGregor rematch has so many twists and possibilities, but in the end it will likely come down to who wants it more and is able to withstand the punishment. Fortunately, both McGregor and Poirier have five-round main event experience and can take a few punches over 25 minutes.

Now, if you’re looking for a prediction, you’ve come to the wrong place, unless the prediction you’re hoping for is that the UFC 257 PPV main event is going to be a banger. If that’s what you’re looking for, I’m here to corroborate it because when fighters as skilled and as hungry as Conor McGregor and Dustin Poirier lock horns, the only guarantee is fireworks.