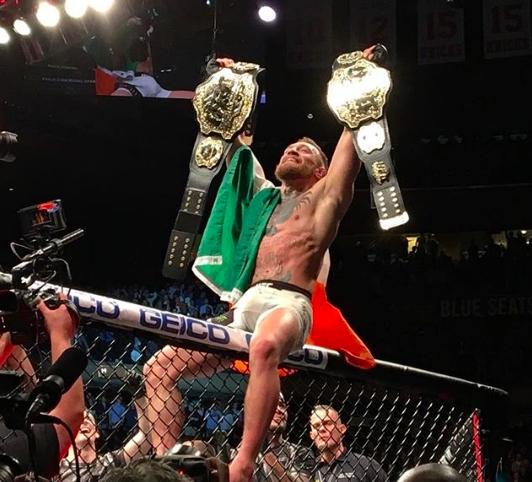 “The Notorious” Conor McGregor returns to the Octagon for the first time in over a year on Saturday, January 23 (7 p.m. PST / 10 p.m. EST on ESPN+ PPV), and this time he’s bringing his famous left hand and billionaire strut all the way to UFC Fight Island in Abu Dhabi.

McGregor will be taking on former interim lightweight champion Dustin “The Diamond” Poirier in the UFC 257 main event. Not only is the bout a rematch of their 2014 contest, but it’s also a highly competitive and relevant fight with major stakes in the division. Definitely one of those “can’t miss” type of events.

Beyond the rematch angle, which pits the fourth-ranked McGregor against the second-ranked Poirier, there’s a very high likelihood that the winner of the UFC 257 PPV main event will earn the next crack at the lightweight title. UFC 257 will also have a major impact on McGregor’s fighting future, and still most people just want to see what version of “The Notorious” shows up in the Octagon on January 23.

So, with just a little over a week before UFC 257: McGregor vs. Poirier 2, it’s time to study up on the biggest MMA fight (or any type of professional fight for that matter) of January.

Read up because there’s plenty ahead for UFC 257 fight week.

Will the McGregor vs. Poirier Winner Earn the Next UFC Lightweight Title Shot?

At this point, it feels like a near certainty that the winner of the UFC 257 main event will earn the next UFC lightweight title shot. How could they not?

Given McGregor’s status as the most famous MMA fighter to ever walk the planet, not to mention the pair of UFC titles he collected in 2015-2016, he’s never too far away from a championship fight, especially in the wake of the retirement of UFC lightweight GOAT Khabib Nurmagomedov.

UFC president Dana White has already expressed his interest in booking a McGregor vs. Nurmagomedov title fight at some point in 2021. White, who is hoping to entice the newly-retired champ back into active competition for a second go around with McGregor, has long stated his desire to promote a McGregor vs. Nurmagomedov rematch, perhaps in hopes of breaking the UFC PPV sales record the pair set back in 2018, but that bout only works should McGregor get past Poirier at UFC 257.

Beyond a potential McGregor vs. Nurmagomedov super fight, the UFC 257 main event has major implications on the future of the lightweight division. In fact, the bout basically shapes the future of the weight class, with potential challengers like Michael Chandler and Dan Hooker (who face off in the UFC 257 co-main event), along with Justin Gaethje and Charles Oliveira all calling for a chance to face the winner of Conor McGregor vs. Dustin Poirier.

McGregor’s Future in MMA (and Boxing)

The reality is, it’s impossible to make it through a Conor McGregor UFC fight week without addressing questions about his second love … boxing.

After McGregor flirted with boxing in 2017 for his one-off mega-selling box-office-breaking boxing PPV against Floyd Mayweather, the questions regarding his future have always included hints and mentions of a return to the ring. And he probably likes it that way.

What’s most important at the moment is McGregor’s fight against Dustin Poirier at UFC 257. A big win on Fight Island could potentially propel “The Notorious” right back into a lightweight title fight (perhaps even against Khabib). However, the bout could also have the reverse effect, you know, because Dustin Poirier is a legit threat who has gone 10-2 (1 No Contest) since returning to lightweight in 2015, winning 6 fights by knockout and another one by submission while collecting eight fight night bonuses during that span.

Should Poirier best McGregor at UFC 257, there’s no guarantee that “The Notorious” gets right back in the Octagon, especially with a potential boxing match against Manny Pacquiao waiting in the wings, a bout that would likely generate bigger sales than any fight McGregor can take in the UFC.

So yeah, the potential impact of McGregor vs. Poirier 2 extends far beyond the Octagon … all the way to the boxing ring.

Which Conor McGregor will show up at UFC 257?

Reviewing Conor McGregor’s career since joining the UFC in 2013, it’s clear that “The Notorious” always shows up to fight.

A true gamer, McGregor is always down for a heady scrap and ready to go when it counts most. He’s won titles on the biggest stages and shocked the world on multiple occasions during his record breaking MMA and boxing career, so there’s never a fear of McGregor not showing up to throw hands and do damage.

But the question remains, “how dialed in is Conor?”

According to UFC president Dana White, McGregor is perfectly honed and fine tuned for UFC 257.

Looking at McGregor’s losses in the UFC (to Nate Diaz and UFC 196 and Khabib Nurmagomedov at UFC 229, both of which he lost by submission), it’s clear that he was not quite a in tune with the fight, fight week, and all the hoopla that accompanies promoting a big time PPV, when compared with his major successes at UFC 189, UFC 194, UFC 202, UFC 205, and UFC 246.

On those four occasions, McGregor was particularly dialed in to the fight and his surroundings, radiating an air of invincibility on fight week. So, it’s no surprise that he was able to summon a deeper level of mental and physical warfare when taking out Chad Mendes and Jose Aldo en route to the featherweight title, or topping Nate Diaz in their record setting rematch. On those occasions, along with his champ-champ performance against Eddie Alvarez at Madison Square Garden and his most recent win against Donald “Cowboy” Cerrone, McGregor felt unstoppable from the moment he arrived for fight week.

It’s tough to keep track of all the times that Conor McGregor has called his shot, but it’s happened so many times that he’s fairly earned the nickname “Mystic Mac.”

From his prediction of beating Jose Aldo in less than a round at UFC 194 (McGregor only needed 13 seconds) to his second-round KO prediction against Eddie Alvarez at UFC 205, Conor McGregor has, well, notoriously called his shot in many, many fights, including his first go round with Poirier.

It was back in 2014 that “The Notorious” predicted a first-round knockout of “The Diamond.” Needing less than 2 minutes to seal the deal, McGregor earned the biggest win of his career (at the time) at UFC 178.

Now, McGregor is predicting he’ll need less than a minute to knock Poirier out on January 23.

That’s one lofty call, and I’m here to see if McGregor can once again pick his shot.

The Rematch For All the Bragging Rights

A great way to tell that the UFC 257: McGregor vs. Poirier Pay Per View is such a huge event is that I’ve made it this far without examining one of the most important storylines: the rematch factor.

There’s literally so much going on with this fight that the rematch kind of gets lost in the shuffle, but make no mistake, this is one sexy fight, and the rematch factor only makes it that much more interesting.

While McGregor easily took the first fight (which was contested at 145 pounds), Poirier has evolved into a completely different fighter over the last six years. It’s a true testament to his grit and determination, along with his tremendous skill.

Poirier is no stranger to encore performances. In 2019, he faced then-featherweight champion Max “Blessed” Holloway in a rematch, seven years removed from their first bout. After winning the first fight, Poirier was successful in his rematch, which demonstrates his ability to re-interpret a former foe at a new weight class, with different combat tools.

However, McGregor has rematch experience of his own, having earned his redemption against Nate Diaz at UFC 202, winning the second bout on the judge’s scorecards after losing the first fight five months earlier.

The major differences in this rematch, for both McGregor and Poirier, are motivation and perspective, and not because Conor and Dustin aren’t amped up to throw fists and trade leather. But rather, Poirier understands the rematch angle from the perspective of having won the first bout (against Holloway), whereas McGregor came back to defeat Diaz in the rematch after losing the first fight.

It’s a lot to chew on. I know. Especially for the first primer of UFC 257: McGregor vs. Poirier fight week. But big-time fights come with big-time backstories, so stay tuned for more content in this leadup to the UFC 257 PPV main event on ESPN+.