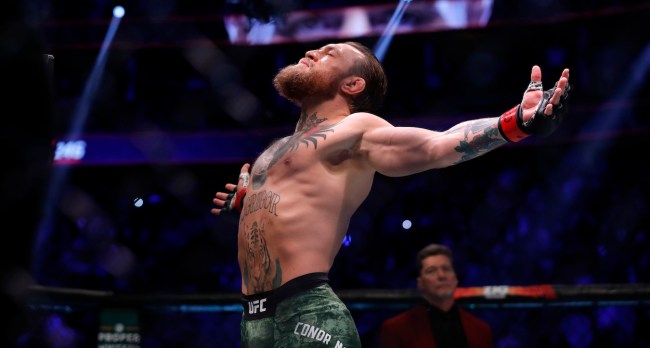 Despite having not won a fight in the UFC since 2016, former featherweight and lightweight champion Conor McGregor took just 40-seconds to remind everyone why he remains one of the most exciting talents in the sport of mixed martial arts.

While McGregor hadn’t fought in the UFC since his October 6, 2018 loss to current lightweight champion Khabib Nurmagomedov, McGregor needed less than a minute to knock out fighting legend Donald Cerrone, who is the UFC’s all-time leader in wins at 23.

Did you miss the Conor McGregor-Cowboy Cerrone #UFC246 match? Well here’s the ENTIRE match. Aren’t you glad you didn’t pay for this? pic.twitter.com/z7THCnvB18

Now that McGregor is finally back in the full swing of UFC — he has previously stated he wants to fight four times in 2020 — fans and the fighter himself are obviously clamoring for a rematch with Nurmagomedov and if UFC President Dana White’s recent comments are to be believed, he’s more than willing to make that fight happen.

“He [McGreor] wants the rematch with Khabib, we talked tonight, and he wants it that rematch, so we’ll make it, but Khabib’s got to get by Tony [Ferguson] first. And that’s not easy fight either, that’s a tough fight for Khabib. But, we’re heading down the path right now, when you look at what Conor just did, when you look at Conor’s history and his record, right? And you look at Khabib — undefeated. We’re literally looking at one of these legendary mega-fights. Like, you know, Ali and Frazier, Ali and Foreman, this is turning into one of those. This thing is going to be massive,” White said to ESPN following McGregor’s UFC 246 victory.

As for why McGregor wants the rematch so bad, White explained that the 31-year-old Irishman feels he “made a lot of mistakes” prior to the pair’s original bout.

“Yeah, well, Conor says, you know, he made a lot of mistakes going into that fight. Some were self-inflicted and others were things that he, you know, obviously couldn’t control. He is adamant that he wins this fight — the rematch — ecause of the things that he was doing or injuries that he had going into the first Khabib fight. That’s why he’s so obsessed with this thing, he wants it back so bad.”

Khabib is set to defend his lightweight title against Tony Ferguson at UFC 249 on April 18 and if he does, it sure looks like a certainty that a much-anticipated rematch with the Notorious will be next.