Just Who Is Dustin Poirier, The Man Fighting Conor McGregor At UFC 257? 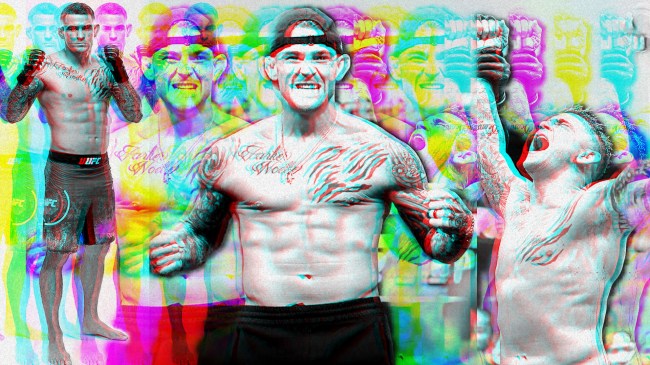 Presented in partnership with UFC 257 on ESPN+
If you’re a hardcore fight fan or one of the 1.9-million people who follow Dustin Poirier on Instagram, you may already know this.

Born and raised in Lafayette, Louisiana, Dustin “The Diamond” Poirier is no overnight success. He’s a lifelong fighter and mixed martial artist who made his pro debut in 2009. And, in the 11 years since his first MMA fight, Poirier has evolved into one of the best lightweights in the UFC and in the world.

This story isn’t necessarily meant to be a biography of Dustin Poirier, but rather a primer. You know, since he’s far less known than his competition at UFC 257, Conor McGregor.

Instead, this story is meant to introduce fledgling fight fans to one of the best fighters in MMA today as he approaches the biggest fight of his career. And that’s saying something considering that Poirier has already won an interim UFC title and main evented a massive Pay Per View against lightweight GOAT Khabib Nurmagomedov in 2019.

First entering the UFC in 2011 as a featherweight, Poirier has been making waves since day one, when he beat Josh Grispi, a highly touted prospect and potential title challenger, in his Octagon debut. His first UFC victory was a major statement, and in the ten years since, he’s racked up 17 more wins in the Octagon, including seven knockouts and four submissions during his runs at featherweight and lightweight. Poirier has also earned 11 post-fight bonuses.

Now ranked second in the lightweight division, Poirier really came into his own in 2015 after moving up to 155 pounds. Coincidentally, it was McGregor who knocked Poirier out of the featherweight division; however, that may have been one of the best things to happen in his career.

Solidifying himself as a lightweight, Poirier has delivered his most impressive performances in the years since. He’s become one of the most game-ready fighters in the UFC, not to mention one of the sport’s best boxers. Both qualities will be essential when he faces McGregor in the UFC 257 PPV main event.

Taking the deep dive into Poirier’s career, there’s no better place to start than his most recent fight, a five-round unanimous decision win over Dan Hooker in June 2020.

A candidate for the 2020 Fight of the Year, Poirier vs. Hooker was everything a fight fan could want from a bout. For 25 minutes, Poirier and Hooker went toe to toe, trading heavy punches throughout, with the occasional grappling sequence mixed in.

Known as an action fighter, Poirier came to brawl against Hooker, delivering a spectacular performance. And, while Poirier won the fight with his fists and grit, he also did so after dropping the first two rounds on the judges’ scorecards. It was a perfect come-from-behind win.

Now, prior to the Hooker fight, Poirier suffered a one-sided submission loss against lightweight GOAT Khabib Nurmagomedov, but who can blame him? Khabib literally does that to everyone, so no one really holds that loss against him. It’s the run he went on prior to the Khabib fight that really demonstrates the type of fighter that Poirier is.

Unbeaten from February 2017, up until the Khabib fight at UFC 242 in September 2019, Poirier went on a tremendous run during that span, not only beating four former world champions, but also finishing three of those bouts via KO or submission.

A few months later, Poirier would finish yet another former UFC title holder by strikes, this time finishing Eddie Alvarez in the second round. The bout certainly showcased Poirier’s ferocity, but it also demonstrated his ability to fight a rematch and improve on the first fight (the first bout was ruled a No Contest after Alvarez threw an illegal knee while Poirier was grounded).

Around the time of the Alvarez fight, Poirier had fully transformed into his current iteration, and heading into his eighth UFC main event at UFC 257, it’s expected that “The Diamond” will deliver how he always has since moving up to lightweight, with heavy handed boxing, forward pressure, defensive wrestling, and impressive clinch work.

All of these facets, save the defensive wrestling, will be paramount when Poirier faces McGregor at UFC 257. He’ll need to assert himself as the bull to McGregor’s matador and stalk “The Notorious” around the Octagon.

In terms of boxing, which is likely where this fight will take place, Poirier has a much different style than McGregor. Whereas Conor likes to strike from distance, Dustin is a classic brawler, albeit a highly skilled and technical one, who prefers to move in close and trade in the pocket, where his power translates.

It’s in close range where Poirier likely has his biggest advantage over McGregor, not only in the dirty boxing game, but also in the clinch, where “The Diamond” likes to throw knees, fists, and elbows, often from odd angles, while threatening submissions with his black belt Brazilian Jiu Jitsu skills.

Of course, McGregor’s clinch game has come a long way since bulking up to 170 pounds, and then moving back down to lightweight, so it’s a crapshoot to know who will have the advantage there.

Already a borderline Hall of Famer, Poirier is one of those fighters, regardless of his opponent, who is always worth watching.

He fights like his life depends on it, and has earned massive fan support, not only for his attitude, determination, heart, and fighting spirit, but also for his philanthropic efforts through The Good Fight Foundation, a non profit he runs with his wife. Those details are somewhat important, but not as useful as his actual fighting resume, which is one of the best in the UFC today.

It’s still unclear if Poirier will have an answer for McGregor in this rematch at UFC 257. However, just in the lead up to the fight, it’s evident that he has a much different, a much more mature, approach to this fight than the last time he faced McGregor.

The change is stark, drastic, and noticeable, and if there’s any indication that there will be a different outcome at UFC 257, it’s that Poirier isn’t using fight week to spew anger and emotion towards McGregor. Rather, he’s been focusing on himself, his task, and his incredibly honed MMA skills, all of which will be on full display on January 23, when Poirier faces Conor McGregor in the UFC 257 main event on ESPN+ PPV.