How To Watch ‘Dana White’s Contender’ Series On ESPN+ 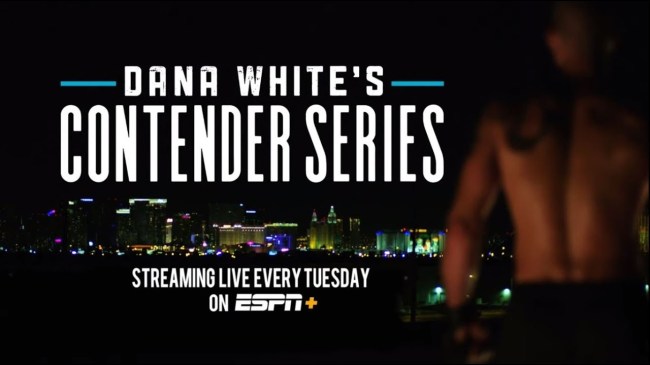 If you’re a big-time UFC junkie, there isn’t a better place to catch the hard-hitting action than ESPN+. No, seriously, as the exclusive home of the UFC, ESPN+ has everything an MMA fan could ever imagine, offering live events, original content and even classic fights and replays from some of the biggest moments the sport has ever witnessed. That’s not just awesome, that’s some all-time type of stuff.

One of the more popular UFC shows on ESPN+ is Dana White’s Contender Series, which focuses on finding the next generation of talent for the UFC. It’s raw. It’s authentic. It’s warfare inside the Octagon like it should be. And it’s every fighter trying to survive the demands to become the next superstar.

Thanks to ESPN+, Dana White’s Contender Series puts 10 fighters on the biggest stage of their lives, hoping to make an impression on White, while showing they can withstand the competitors inside the Octagon. And, with the show streaming all available episodes on ESPN+ now that Season 3 is complete, fans get to replay all the in-depth action while seeing the future of the sport.

With the 10-week competition complete, make sure you relive all the drama by streaming Dana White’s Contender Series on ESPN+, which is a must-do if you’re a UFC fan who needs to get their fill of intense action.

Since you probably have a few questions about ESPN+, we break it all down to show you costs, what’s included in the subscription — including all the exclusive UFC content imaginable — along with some other original programs you can check out.

How Much Does An ESPN+ Subscription Cost?

The first thing you’ll probably want to know is how much ESPN+ is going to set you back, right? In a time when we’re streaming things nonstop, and have accounts for things we’re opening new personal emails for, ESPN+ is one of those streaming services that you’ll absolutely need in your life — especially if you’re a UFC fan.

What’s Included In An ESPN+ Subscription?

Have we mentioned that ESPN+ is the ideal streaming service for those who claim to be an MMA junkie? Take a look at what a subscription gets you.

Other Than Being The Exclusive Home Of UFC, What Other Content Comes With An ESPN+ Subscription?

Whether you’re someone who loves ESPN+ for the 30 for 30 documentaries, want the service for the exclusive UFC content, live events or original series’ like Detail: From the Mind of Kobe Bryant, or Alex Morgan: The Equalizer, or SneakerCenter, which focuses on sneaker lifestyle and culture across sports, entertainment and beyond, among others, every single sports fan should include the streaming service into their monthly budget. The fact that it costs just $4.99/month — or $49.99/year — is just an added bonus.