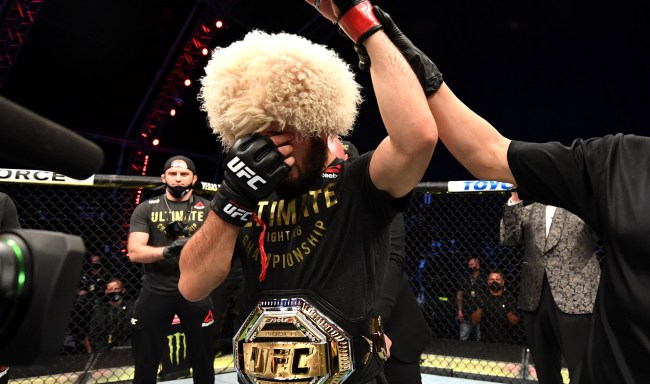 After Khabib Nurmagomedov put Justin Gaethje to sleep with a triangle choke in the second round at UFC 254 he announced that he was retiring from MMA with a 29-0 record and as the the longest-reigning Lightweight Champion in UFC history.

“I promised my mother this is going to be my last fight,” Khabib, whose father passed away due to COVID-19 in July, said in the octagon following the victory. “I only want one thing from the UFC, I want to be number one pound-for-pound fighter in the world.”

He got his wish as the latest UFC pound-for-pound rankings do indeed have him at the top, regardless of what Jon Jones thinks.

This week, speaking to The Zach Gelb Show, UFC president Dana White revealed that he isn’t so sure we’ve seen the last of Khabib fighting inside the octagon.

“I’ll tell you this and I haven’t told anybody this yet, but Khabib and I have been talking,” said White. “He was completely emotional that night when he got through that fight. I have a feeling that he might go for 30-0.”

Considering Khabib’s coach Javier Mendez had no idea Nurmagomedov was going to retire until he made the announcement, and the fact that Khabib’s father wanted him to reach 30-0, White might not be wrong.

“I do [think he’ll fight again in the UFC],” White said. “I think that he’s not going to retire. His dad wanted him to get to 30-0 and I think he wants to honor his dad’s wish.”

I have 15 minute interview with @ufc President @danawhite that will air tonight on @CBSSportsRadio at 8 PM Eastern/5 Pacific.

Dana told The Zach Gelb Show on CBS Sports Radio that he and @TeamKhabib have been talking & he expects Khabib to return & go for 30-0.

If White is correct, and Khabib will eventually say he’s coming back, the question then will be, against who?

Right now it would seem there are only two real fighters with the kind of pull that could draw Nurmagomedov back in: Conor McGregor and Georges St-Pierre.

McGregor still has to get past Poirer on Jan. 23 for that to happen.

St-Pierre, however, has been talking a lot lately about coming back to fight Khabib. This fight makes the most sense with both fighters “coming out of retirement” for one last hurrah.

Plus, if the UFC were to stage the bout in Montreal there wouldn’t be enough seats in the city for all the fans who would want to come watch. So my money is on that one happening.