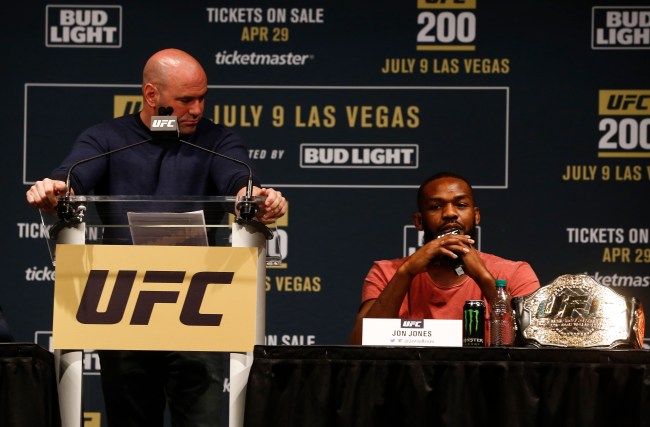 Jon Jones has an issue with Dana White calling Khabib Nurmagomedov the GOAT.

On Saturday, Nurmagomedov retired from MMA with a perfect 29-0 record after making quick work of Justin Gaethje at UFC 254.

"I promised my mother this is going to be my last fight."

"I only want one thing from the UFC, I want to be number one pound-for-pound fighter in the world."@TeamKhabib announces his retirement from MMA. Wow 🙏 #UFC254 pic.twitter.com/RFnCyu2X0W

UFC President Dana White says Khabib is “one of the toughest human beings on the planet” and is the GOAT after winning his “last fight” pic.twitter.com/XQJhcjzJJu

“Apparently, he was in the hospital, He broke his foot. Three weeks ago. So he has two broken toes and a bone in his foot that’s broken or something like that. That’s what his corner was telling me. Never told anybody, walking around. I mean he is one of the toughest human beings on the planet.”

“He is the No. 1 pound-for-pound fighter in the world, and you seriously have to start putting him up there at GOAT status with whoever else you think is the GOAT,”

Jones, who many consider the greatest MMA fighter of all-time despite his controversial past, took issue with White declaring Khabib the GOAT.

I’m just going to ask for the heavyweight championship belt and see if they give it to me. Since we can just ask for things now 🤷🏾‍♂️

The same Company who accused me of possible steroids vindicated me from it. If I just started fighting for titles four fights ago, I look like an absolute beast too. But OK, I guess you’re only worth your last performance in this game🥴 https://t.co/cwhb7BZX1J

when I signed with Ufc I was one of the youngest fighters on the roster, youngest champion in the history of the sport and have only had three competitive fights. https://t.co/kixnRfkQbR

I mean if I get out ranked by a man with only three title defenses, I don’t really know what to think anymore https://t.co/eQejGlRd1r

Yet people want me to stay quiet and let him have his moment while I just sit back and watch my hard work get moved down the rankings. It’s not fair to my family, or the team of people who have sacrificed to get me this far https://t.co/0IeojszXvm

Over 50% of my career have been title fights. LeBron James is allowed to win a game by one point but not Jon Jones. Man I have really spoiled you guys https://t.co/vz4lGh0ESJ

If we’re having a popularity contest, I’d gladly take my L. This shit has nothing to do with fame or being a good person. I’ve giving my whole adult life to this game, I owe it to myself to speak up.