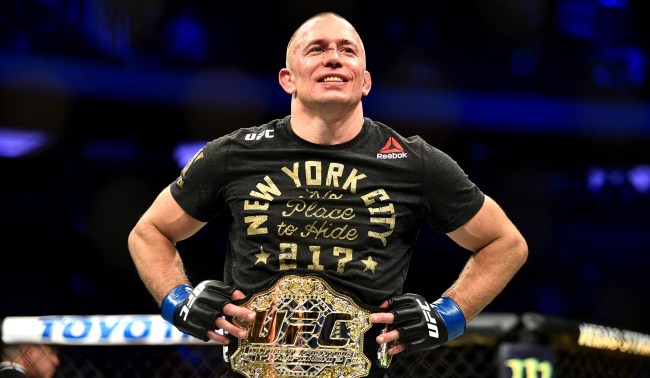 Georges St-Pierre is arguably the greatest UFC fighter of all time. He was champion in two different weight divisions, welterweight and middleweight, and until the pandemic hit was supposed to be inducted into the UFC Hall of Fame in 2020 after a MMA career that saw him go 26-2 after winning his last 13 fights in a row.

In February of 2019, undefeated UFC lightweight champion Khabib Nurmagomedov tried to get St-Pierre to delay his official retirement, offering to give him a fight in November.

Khabib even offered to make some serious concessions to make the fight happen, writing on Instagram, “it would be honor for me to share Octagon with one of the greatest fighters of all time. Let’s do it 155 lbs, or I give away 5lbs to you, cause you newer done 155. Well, it’s your choice 155 or 160, Montreal, NYC, Moscow or Abu Dhabi. Send me location my Friend.”

Let’s do it in November.
After this fight you can retire. I grow up on your fights, and have nothing but respect for you, and I believe showed that to you George when you were in Moscow.… https://t.co/btkxMFPBhh

Unfortunately, as every MMA fan knows, it didn’t happen and GSP announced his retirement.

St-Pierre, now 39, made it sound like he might not be 100 percent done fighting in an interview he did with TSN on Wednesday.

Spoke with the legendary Georges St-Pierre and asked why he would want to step back into the UFC pressure cooker when he could be comfortably retired.

His reply: "Why step back in? But why NOT step back in? We only live once! So that's the question that I'm facing now." pic.twitter.com/IxYLhBE68O

“Why step back in, but why not step back in?” said St-Pierre. “We only live once. So that’s the question that I’m facing now. If I have an opportunity to do it and all the stars are aligned and I don’t do it. I’ve still got it. I would say I’m still in my best years. Will I regret when I reach 50 years old? Will I tell myself I wish I had done that and I did not do that.

“It was an opportunity of a lifetime to fight a guy [Khabib] who’s undefeated, who’s never been beat and I could have been the first. I don’t know. Sometimes I feel like, now with COVID the situation is different, but when I train, I still get it. I’m very confident. If you would ask right during training or before training, ‘hey would you like to fight again?’ I would be like ‘yeah, let’s do it. I’m down.’ Then after I go home and everything, after a hot shower then you go home, things calm down and the adrenaline calms down and you ask me would you like to fight and I’m like I don’t know, I’m not sure about it. I’m good where I am. I’m comfortable. I’m satisfied. Satisfaction for an athlete is the death. You’re done. You’re finished when you’re satisfied.”

St-Pierre may be satisfied, but he still doesn’t sound like he’s completely done.

“In order to come back, I’m in the mental state where I’m not sure,” St-Pierre continued. “The stars would need to be all aligned perfectly. More than two years ago, it’s already almost three years, we tried to make the fight with Khabib. I wanted to go all in. I was ready for it. Anything goes. I was all in. Now things have changed. Three years have gone by, COVID and all that, I kind of let go of the idea of coming back to fight. You know what I mean?

“So I would need to put me back in a different warrior mode. Cause when I fight, my brain doesn’t function the same way than when I’m in normal life. Maybe it’s because of my obsessive compulsive thing that I’m so focused on it like nothing else matters. I’m only focused on one thing and it’s to win and what I need to do to win. I need to achieve it and do it at all costs. I need to rewire myself if I get to fight again.”

There’s also the matter of what weight he would be fighting at if he came back for Khabib.

“There’s a lot of infrastructure problems in the weight class,” said St-Pierre. “He’s fighting at 155. I know I can go at 155, but the problem is now I’m 39. Three years have passed. I haven’t cut weight for a long time. If I go down to 155, my performance will be compromised. I know Khabib is the same size as me, he’s maybe bigger than me when he’s off season. I never got up to 200. I’m at 185. So that turns to his advantage if we cut more weight, he’s able to bounce back more than I am. He’s used to it.

“I’ve never been a fan of cutting weight. Even when I was a welterweight, I was 185. Most guys are much bigger than 185. But that’s one of the things in the principles of the art of war. Know the terrain. I don’t know. I’ve never fought at 155. He knows. I believe to make it fair we need to fight in a place where we’ve never been, both of us. That would have to be a condition to me coming back if it happens.”

In the meantime, while UFC fans wait and hope for this fight to happen, Khabib has to deal with Justin Gaethje in a title unification bout at UFC 254 on Oct. 24 on ESPN+.