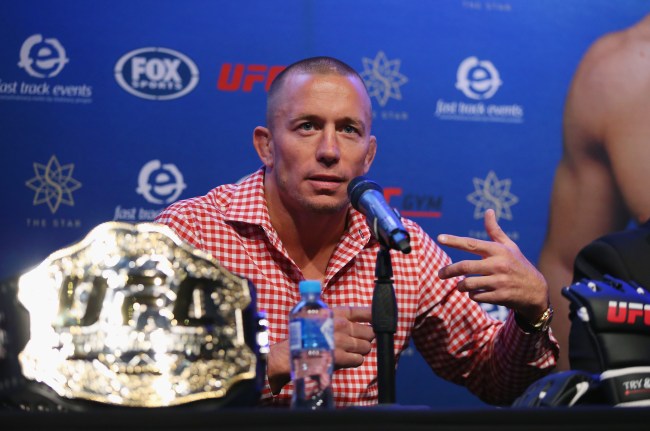 This afternoon reports surfaced that UFC legend GSP scheduled a press conference for Thursday in Montreal to announce his retirement after failing to land a fight agreement with Khabib Nurmagomedov.

Georges St-Pierre will officially announce his retirement from MMA tomorrow morning at a press conference in Montreal, multiple sources told ESPN. GSP had hoped to secure a super-fight w/ Khabib. Once that didn’t materialize, he decided it was time to walk away. More shortly.

After the report of St-Pierre’s retirement made the rounds Nurmagomedov took to Instagram to offer a fight to GSP.

Khabib urging GSP to reconsider. This is fun. https://t.co/IVCMPxF8zt

Let’s do it in November.
After this fight you can retire. I grow up on your fights, and have nothing but respect for you, and I believe showed that to you George when you were in Moscow.
But, it would be honor for me to share Octagon with one of the greatest fighters of all time.
Let’s do it 155 lbs, or I give away 5lbs to you, cause you newer done 155.
Well, it’s your choice 155 or 160, Montreal, NYC, Moscow or Abu Dhabi.
Send me location my Friend 📍”

It’s unclear whether GSP will reconsider his retirement or if the UFC would accept the fight but let’s hope all parties involved work things out because it would be awesome to see GSP in the Octagon one last time.